Why Many People Operate Just Like Nimrod the King 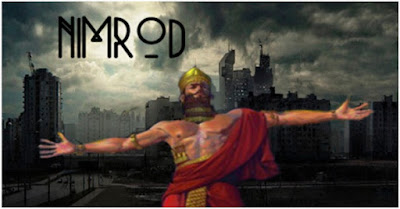 This blog is designed to expose the falseness of humans who operate just like Nimrod from the bible and they wonder why they are in trouble with the Lord God Almighty.  Let's examine some very powerful words.  In Gen. 8:15-17. God spoke to Noah (God actually speaking), but more importantly God commanded Noah and his bloodline to go forth, to spread across the earth abundantly.

Let's look at this with deeper aspects. In the next Chapter 9 of Genesis, verse 1 “And God blessed Noah and his sons, and said unto them, be fruitful, and multiply, and replenish the earth.” So as you can see we have a second command to go forth. Now moving forward in Chapter 9 we find God again giving us a command again for the 3rd time!  In verse 7 we are told that we’re to go again and multiply abundantly.

Here we have God telling Noah and his descendants to GO forth, cover the earth, spread abundantly and multiply. God didn't just say this once, but God said this 3 times.  Are you truly starting to see a picture develop here?

Now let's move ahead into the book we find Noah had awoken from his drunken ways and spoke these words in verse 25, "Cursed be Canaan".  Several questions arise, Why did Noah curse Canaan? Was not Ham the one that committed the sin? Furthermore, what was the sin of Ham that caused Noah to curse the descendants of Ham? Why was the punishment so severe?

So what was the Sin of Ham?  Many explanations have been offered as to the exact nature of the sin of Ham and the harsh punishment that was placed upon Canaan. The event may give only a brief outline of a more sinister action.

1.Castration - Some argue that Ham castrated Noah which showed why Noah had no other sons. This crime would, of course, warrant the punishment.

2.Incest - Others believe it was a case of incest. Ham slept with his own mother thus uncovering his father's nakedness. Canaan, it is argued was the offspring of that union.

3. Activity - Still others contend that there was some activity between Ham and Noah. However, the Hebrew text makes it clear that Noah uncovered himself and that Ham saw this nakedness that was uncovered. Ham did not cover Noah up but rather made fun of him. Many commentators have had problems with the punishment being so severe if simple ridicule is in involved.

4.Shameful Act - In the ancient world merely seeing one's father naked was a highly offensive act. The father's position as moral and spiritual head would be held in disrepute and the family unit would suffer as a result of this. The culture in which this event occurred considered it a capital crime for a child to strike their father.

It seems that Ham innocently came upon his father after he had uncovered himself in a drunken stupor. The sin of Ham, therefore, is that Ham told his brothers of what he had seen. In doing so, it brought shame to the entire family. It is quite possible that Ham tried to seize the leadership of the family at this juncture.

Many commentators believe that the curse of Ham was not pronounced immediately after the event but at the end of Noah's life. However, the natural reading of the text has the curse occurring directly after Noah realized what had happened. The act of Ham could not go unpunished. In the curse of Noah upon Canaan, he was not punishing him personally for something his father Ham had done.

The words of Noah refer not to Canaan himself, but to the nation that would come from him. Ham had caused a breach between himself and his father which called for some type of judgment. The judgment would occur on Ham’s descendants. Ham's descendants foreshadowed the deeds of his descendants. The contrast between the reactions is the basis of the following blessings and curses on their descendants. It speaks of two groups of mankind. Shem covered nakedness and hid shame, while Ham exposed Noah's nakedness.

So are you still with me to this points I am making? If not let's look at this quickly to help you:

1. God instructs the humans who survived (Noah and his family i.e. descendants) to go forth and be abundant across the WHOLE earth - not a small place or stay in the same region!

2. We start to see one of the greatest attributes of Man arise once again - REBELLION. Disobedience to God is REBELLION and Disobedience is WITCHCRAFT!

3. We see that a potential nation that would be cursed under Ham as a result of this Curse of Canaan. As a result of Ham, he had Cush, who then had NIMROD!

People are you seeing this now clearly now? God was teaching us once again regarding DISOBEDIENCE to HIM. When God tells us 3 TIMES what we are to do - we need to OBEY HIM. Now in Gen. 10 we find these words....

6 And the sons of Ham; Cush, and Mizraim, and Phut, and Canaan.
7 And the sons of Cush; Seba, and Havilah, and Sabtah, and Raamah, and Sabtechah: and the sons of Raamah; Sheba, and Dedan.
8 And Cush begat Nimrod: he began to be a mighty one in the earth.
9 He was a mighty hunter before the Lord: wherefore it is said, Even as Nimrod the mighty hunter before the Lord.
10 And the beginning of his kingdom was Babel, and Erech, and Accad, and Calneh, in the land of Shinar.

So as you can see we're told in previous chapters to go forth and multiply - NOT have a kingdom - Who had a kingdom as a result of staying in a region? NIMROD did.  Who did NIMROD come from? Look above - see for yourself once again.

Do you understand what the words describing Mighty Hunter mean? This also refers to a 'Hunter of Souls'.  So with that ends our lesson this day.  We’re still rebelling from God by NOT obeying HIM to this very day. Now many of you are saying well come on Reverend the whole earth is now populated we spread forth.  I would say to you YES, but you realize if we had truly OBEYED God the events to come of HAM, THEN NIMROD would not have had to occur?

However, God saw once again that we failed to OBEY HIM, therefore HE gave us one last chance...HIS only Begotten Son from Heaven above.  But yet many people still do NOT want to OBEY God and are confused as to why we are just like NIMROD - Mighty Hunters - not of souls this time - but of MATERIAL and LUSTFUL ways!

I pray this has helped someone today awaken!

Posted by eyeontheparanormal at 8:02:00 AM