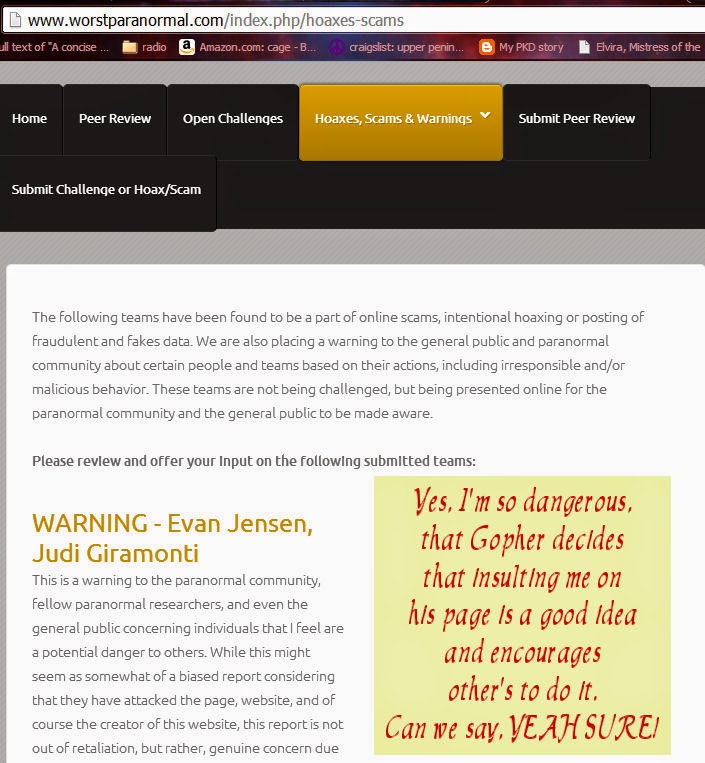 Poor little Gopher, a.k.a. Christopher Michael Young (a.k.a. Topher an alias used for the show), former PRS (Paranormal Research Society) and “Paranormal State” TV show gopher (personal assistant) for Ryan D. Buell (founder for PRS).  Topher had a few spots on the show.  Gopher seems to have his knickers in a bunch right now.

If you haven’t heard of Christopher Michael Young online in the paranormal circles while being a paranormal enthusiast, you will.  Generally people do not know who he is, even with his affiliation to the once popular show and find out only when he suddenly shows up antagonizing them or a friend demanding absolute proof of paranormal phenomena on photographs where no statement exist that one thinks it is paranormal.

Christopher was once known as “Worst Paranormal” meaning he was trying to highlight the “worst” in the field.  I have to say that the concept seems like a valid endeavor, except that perhaps his background did not afford him the reality of the real people and the real way most do things out there in the paranormal community.  (Note: Later changed to “Paranormal and Supernatural Claims Review”, but, we’ll keep with the nickname he so obviously earned.)

For instance, Christopher has time and time again attacked people on single pieces of evidence, (had these people actually said these photos were paranormal in the first place that is.)  The general rule of thumb and mostly accepted practice is to try to debunk all evidence collected, including electronic voice phenomena (EVP’s) (something I have not really seen him even try to debunk to this day) that are collected on an investigation.  A single piece of “evidence” (not to be mistaken as “proof”), is not considered valid WITHOUT COLLABORATING EVIDENCE.  He is so miserably ignorant of paranormal investigating that he does not even think about taking a synopsis of the evidence to garner what they are doing.  Instead, he attacks one by one any piece of what he considers their evidence and tears it apart.  He generally does this miserably, without realizing fully what he is talking about.  Listen to this link of how he tries desperately to berate and humiliate and force into submission this group of people from The Southwest Ghost Hunter’s Association (SGHA) who have PHD’s and are experimenting with sound.  It’s extremely interesting and exciting just to hear what they are doing and very humorous (especially when you understand just some of the science behind it and many will, but not Christopher a.k.a. Haunted Australia).  If even people with PHD’s can not make it through the ridiculous review process, what chance do most of the paranormal investigators in the field have?

Link to show on the review process of Worst Paranormal http://www.sgha.net/worst-paranormal-peer-review/

People hit “like” on Young’s page because, it is not clear to them what his community page is about and it appears to be just another paranormal team with a fancy name. (It is anything but a peer group or community either.)  Generally speaking, people in the paranormal often communicate with each other and share information, techniques and ideas.  So it’s common to like many groups and “fan” pages and “community” pages.  Something that Christopher Young does not seem to understand out there.  Once in a while they’ll even like a comment not realizing fully what it’s about or what the issue is.  I have seen this happen many times.  So many people get caught up in numbers without realizing the lack of page interaction, which tends to be extremely low for his page.  This actually means he has very little pull in the paranormal community and being so, IS NOT A REPRESENTATIVE OF THE PARANORMAL COMMUNITY.  His page likes are not indicative of true interaction or support.

This is a guy who likes his daily dose of drama and readily spews it out where ever and when ever he finds some small tidbit to chew on.  He will take that tiny aspect of which he can criticize and build it into a giant mountain of overly regurgitated whining, complaining and just plain unadulterated chaos and do it for days.  It happens to people over and over again.  When he offers up this wonderful find like a cat catching a mouse, he leaves a nice post in his group setting the stage for the few members he has to post down right crude and rude comments that are anything but professional and then has the nerve to say he speaks for the entire community.  If the community was behind it, they would be posting too.  The one thing I find throughout any of his posts is any credible work being done at all.  Can anyone remember the groups he “exposed” or remember who any of the members were in them, besides me and my co-hosts?

One thing I find so funny is the mention of how I am so dangerous on his web site and that he is concerned for others, yet, makes post insulting me and encourages others to follow suit.  Wouldn’t most people think if this isn’t true and he is lying or completely stupid?  As he would not only be endangering himself, but, others with that type of thinking, would he not?  I suppose I am dangerous to him, because I stand up to him.  He has very little on me, so  he grasp at what ever small straw he can and inflates it into some great crime of which he claims I should be jailed for.  Of course my crime is telling the truth that he likes to ignore and make stuff up.  I find his rants amusing and ridiculous and find myself poking fun of his obvious flawed actions that everyone sees with him doing this.

Using big words, but, failing to properly learn what it is to be a paranormal investigator (and I do not mean the measly show training he got), or find out what the true field is all about and being so closed minded as to think he is the drop all of all paranormal knowledge, when in reality he is so ill informed, is obvious to most and never helps his case against people.

Investigating the paranormal is far more then taking pictures and throwing up plagiarized pictures of how dust orbs are formed.  The greatest flaw I see with his attacks is the inability to see the people he hurts that are not only berated in these online attacks that he seems so callous towards, but, those who are asking for assistance with their homes.  If you lack compassion and empathy for others, leave the field.  There certainly is no love of doing it feeling this way, unless one looks to control.

I’ll leave you with this thought, to all those whom I speak up for and have had the wrath of this unfortunate and sorry soul… He can not understand.  He doesn’t care.  It’s not about you.  It’s about his own ego.  Do not feel insulted, hurt or even worry about what he says.  Say your peace on your own page, avoid commenting on his that reinforces his actions and behavior by giving him attention and then, cut him off, block him and do not stress.  More times then not, what he says negative about others, will be read as whining or rude and reflect more on Christopher or any of his cohorts then the one he means to defame.  It always backfires.  This is why Christopher is perceived the way he is, a sad man with a very arrogant and grumpy nature who spews hate in the guise of self righteous indignation.

Posted by eyeontheparanormal at 3:46:00 PM 4 comments: