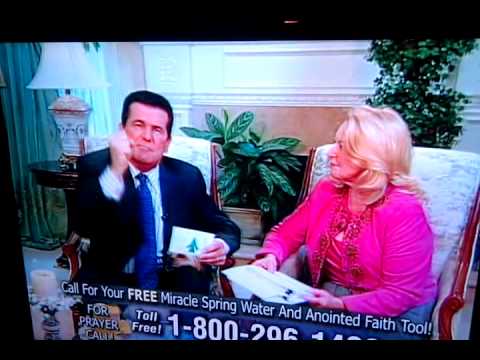 Got debts? Do you owe money to someone? Can't figure out how to out from under that mortgage payment? Would you try ANYTHING to relieve yourself from those damn bills?

Well some people will. And other people, like Peter Popoff, will do about anything to help pay their bills too. Anything in this case includes ripping off people who can afford it the least.

As the television murmured in the background I was working at my desk editing a podcast. Suddenly a booming voice came across the room " I HAVE BEEN ANOINTED BY GOD TO RELIEVE YOUR DEBTS SSUUPPEERRNNAATTUURRAALLYYYYYY!!!"

I jumped and was instantly pissed off, what the hell was that racket? Looking at the TV I watched as Peter Popoff spoke (and yelled) at a lady sitting across from him. He was telling her god wanted to release people from their debts, he knew this because god had told him. I vaguely knew of Peter Popoff. I had heard about James Randi giving him a quick hard kick in the pants on the Tonight Show. Other than that I hadn't seen anything of him, until now.

On the screen the shot had changed to a line of people taking turns holding a microphone. If I had to guess I would say about 90% were African Americans, the other 10% made up of various other races. 95% were women.

They took turns walking up and telling their story of how god had eliminated the bills which had been piling up around them. Every person who stepped up to speak had an incredible story of some kind. One lady was about to lose her home but she had got a check in the mail for exactly the amount needed to keep her home just in time to avoid foreclosure. Another had finally managed to find a job but her car had broken down. Without the car she wouldn't be able to take the job...but wait.....YES! A check had come to her also. The amount was enough to pay for the car repairs. THANK GOD!!!

I watched and the more I watched the more sickening the whole ordeal became. Peter would come on and stare into your eyes promising the love of god would solve your money problems. It was as if he was staring at his prom date telling her whatever was needed to get his hand up her dress.

Quite a number of people were giving testimonials. I watched closely to see if there was any indication they were not being honest, I didn't see anything obvious, but that didn't mean a whole lot.

This back and forth between Peter Popoff and the people who had taken god's money to pay bills went on for about 45 minutes. Occasionally a booming voice would cut in and tell you how to get your own bills paid by god.

I figured what the hell. I was curious exactly what it was that Peter Popoff was up to. I went to the website and applied for a windfall of cash from god himself , then I made a peanut butter & jelly sandwich. I ate the sandwich while I waited for my new friend Peter to use his connections and relieve me from debt.

About a week and a half later (and several more sandwiches)I got a envelope from Peter Popoff he has spoken with god and has a plan, or god does I'm not sure which. I'm going to send Mr Popoff some cash and see what comes of it. It seems I am an important figure on his mailing list.......must be god's will. Posted by eyeontheparanormal at 6:19:00 AM No comments: