"Be polite....be professional....be prepared to kill everyone you meet."  (advice given to new platoon leader in Afghanistan's city of Shkin, which was described as "the evilest place in Afghanistan"...swarming with undercover al-Qaeda.

"Always be on guard." (Jesus, dozens of times)

I like to read, but it occurred to me that, without any intent on my part, I had  recently bought/read (dollar store) two volumes on being an infantryman in Afghanistan--The Unforgiving Minute, by Craig Mullaney, and War, by Sebastian Junger.

Compared to Iraq, little attention is given this site of war..which is unfortunate and unfair..Anyway, when done with both, I was overcome with various emotions. The horror these 18-25 year old Army infantry went through was unspeakable.The harsh sounding advice (be prepared to kill everyone you meet) reminded me of Viet Cong tactics in Vietnam...blending in with the crowd. Think.of how emotionally frazzling it must be to have to live with such instructions, if one wanted to stay alive? Is it any wonder, so many of these vets have a difficult time adjusting to non-combat environments, not to mention civilian life?

The first principle of spiritual warfare is the REALITY of it.

When  God sovereignly Called you into a personal relationship with Him, at great cost to Himself, the Lord also commissioned .you into a great spiritual war..I  have in my hand the Lt. bar that my dad wore in Europe during WWII. There are no pacifists in this war. There is a saying, "We may not be interested in war, but it is interested in us." That is certainly true of spiritual war.Nothing profound or new here....just a reminder that these filthy spirits hate you, and we must be on guard.

In Afghanistan, when the bullets, mortars, and RPG's were not flying, there was the tedium of everyday life in a hostile climate and environment. From Alexander the Great up to the Soviets, all attempts to tame/conquer this wild terrain were unsuccessful. Sand....sand....and more sand--as well as rocky cliffs is their harsh reality.

Slogging...slogging...and more slogging was the soldiers routine.I think it is very important that we realize the brute fact of slogging as part of the Christian life...including spiritual warfare. Especially in the front line battles in dealing with demonic oppression, there is a tendency to "super-spiritualize". I have seen God do extraordinary things in oppression combat, but most days are slogging ahead. Dealing with our own brokeness, as well as the "sand" of our own flesh--weakness, and indwelling sin....the drag of the world--all these conspire to make slogging an inevitability. To be forewarned is to be fore-armed. Life is a battle and not a circus.

That may not sound earth shattering to you, but romantic or unrealistic views of spiritual warfare can cause serious harm. Unrealistic expectations of the "normal Christian life" has often led to varying amounts of disillusionment. We wonder what is wrong with us if we "lose the fire"of emotion, but warfare is HARD."The spirit is willing but the flesh is weak." Jesus said to His disciples.

Others will quote a favorite verse, and forget the larger context of the bible. I suppose what I have come across the most from my minister friends who don't understand why I needed to write my book is this-- if we walk closely with the Lord, then we do not have to worry about Satan/demons. My reply is that many people have found themselves under demonic oppression--so that advice is cruel to these folks (just walk with God and everything will be ok) During Jesus' ministry He didn't give that kind of shallow advice...and He was frequently exorcising demons. So, there is a kind of "false-triumphalism" that plagues many pastors. Many of you know exactly what I'm saying or talking about.

SEMPER GUMBY is a term I got out of the "Unforgiving Minute". Captain Mullaney was a West Point grad, Rhodes scholar, Army Ranger, etc...and he does a marvelous job of describing his education into warfare.When he first arrived in Afghanistan, he was convinced that he was able to plan for every variable for each activity his platoon did. Until the haunting day on Losano Ridge, when he and his men were ambushed and one of his men was killed.You simply cannot be in absolute control of the situation--only God is.The death of one his men shook Captain Mullaney to the core of his being--and he wept.

This dawning of awareness is what gave rise to their principle of "Semper Gumby"..being flexible to move with the flow, and realize that fighting battles is often done in a fog of unknown variables.This reminded me of the trials of Job, in which supernatural reality was invisible to Job. He suffered, not knowing why. We too need to be Semper Gumby--always flexible to follow our Lord, and change course if need be.There is so much about spiritual warfare that I do not understand. And I am certainly not privy to Satan's plans...and God's will is often shrouded in mystery, as to WHY certain things happen.

These are only a few principles of spiritual warfare, and I have left unsaid many important realities...chief of which is that Christ is Victor...and of this I AM certain--God is good, all the time.

"Seeing Ghosts through God's Eyes" (also in a Kindle edition)...please consider purchasing my book which uses science, logic, and the bible to analyze the true source of power behind paranormal activity.
Posted by eyeontheparanormal at 2:41:00 PM No comments:


Well where to start? I don't know so I will go from the top. There is a woman called C Ce Carole AKA CC the Huntress. She calls herself  the queen of the paranormal. I wonder who said that. She runs what she calls the paranormal awards. She also investigates locations and has a production company.  I refuse to  post any links to her web site or YouTube page as it is just flat out wrong

So my questions. Why does she call her self queen of the Paranormal? I mean really that is a new one to me. So now people need to come up with a title for them self's to feel important? So I want to know who are her loyal servants? Is there  a waiting list? Is the castle up and a hill if so How are Shrek and his wife taking it?

Now let's go to the attire. She has videos of herself dressed up like she is going clubbing some of you may even call rated R. I posted photos below I took off her YouTube page. 1- she is coming out of a wall wearing a mini skirt legs first during a investigation. 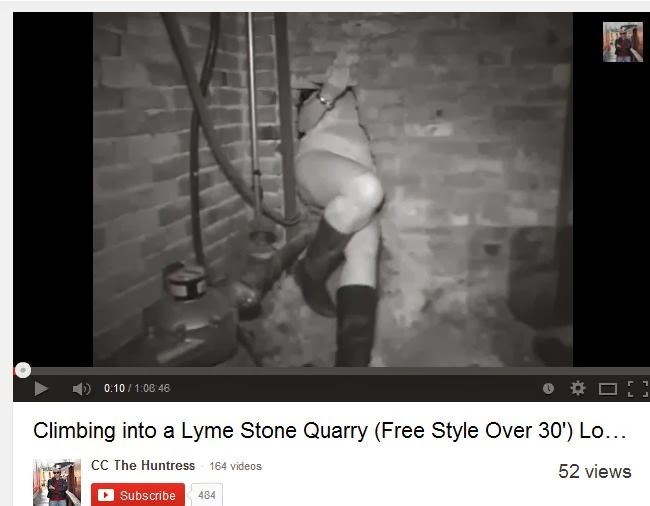 Then in another she is coming out of the water with a wet tee shirt.


Then she is posing in a miniskirt for photos on her page. In one of you the photos you will see her talking about sexy boots and being naughty. Are you kidding me?

I do not see any reason other than she might feel insecure with herself. Sure, some guys will get a cheap thrill out of watching and looking but not this guy. I not only find it very unprofessional but unnecessary as well. there is a time and place to play dress up and it is not during investigations nor is there any room in the paranormal field for it. This was brought to my attention by so many people and I had to look for myself. I honestly never paid it much mind till I was directed on where to look.

Now to the paranormal awards. She is a 5-time winner, Gee that's hard when you run them. Hell, I will start my own and give my self 20. Ha ha top that. Who votes? And honestly they mean about as much as a roll or wet toilet paper in the woods after eating fast food. And in 2012 she had a poster in Texas calling her radio show the # 1 radio show in America with a big trophy. Funny I do not recall seeing it in any TV awards.

This is very disturbing I was told by a very reliable source after the Sandy Hook tragedy she said she was going to go down there and pray and bring healing energy.  This is just another example of how unreal this woman is. When you wrap everything up in a nut shell. In my and many others opinions she should try another field that may more suited what she is doing.  In my opinion she is a disgrace to the paranormal world and making a mockery out of it.