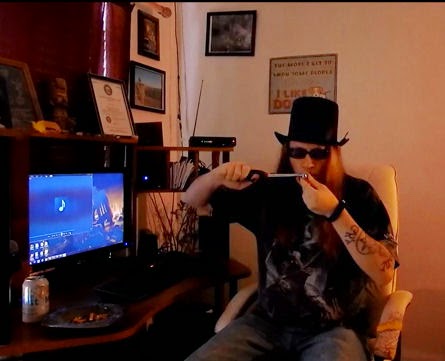 I never have a problem writing these blogs.  Every week it’s the same thing, someone does something that makes a perfect subject for the blogs.  I always say, my blogs write themselves.  Last night though, took the cake for reporting about some outlandish behaviors of one man, who I can not help but mention.  He makes a completely perfect poster boy for what type of person motivates me into doing what I do out there.  His name… is Rick Rowe.  He adds the prefix “Lord” for Lord Rick Rowe.  Oh, and he means like the Lord, as in God, not just as Lords and Ladies prefix.

Rick is the owner of a Yahoo group called Paranormal Ghost Society that has been around since at least 2006 and I hear even longer by a few years from some.  He has a web site by the same name.  While his name does not reflect it, he’s a Bigfoot hunter and does very little ghost investigating.

Now the first thing people may think is… ok, he’s been around for a while.  They click on the link to his site; it won’t be what people expect.  It’s colorful not appropriately sizing to most screens and its grandiose and out dated style hits you in the face, and it reflects more of self promotion, little representation of any ghost, paranormal, Bigfoot or alien subjects and… it seems to be about POT and lots of it.  It’s like the main reason to have a site.  He is obsessed with marijuana to the degree; it becomes very obvious to anyone seeking him out on Facebook or his website.  His profile pics and photo albums are full of him smoking a pipe and appears his favorite type of pose and believe me, selfies done this way is forte’.

Now, I do not have problems with what people do with their lives, but, he’s trying to represent a team in the paranormal and I know people and how the public sees things from running my shows.  He looks like a pot head with the way he represents himself and not any kind of serious ghost investigator or Bigfoot hunter.  But, ok, I can over look that, like a lot of people might… until… you see what else he has on his site.

He has a forum that is called Theatrical Clowns.  It goes back to 2007 where he gets upset with people and, writes a forum post on them.  But, it goes further then a post or two… he makes them a forum subject where he can make repeated posts about them and he has many, posting thousands of posts against others, berating them, insulting them, threatening them and just really ripping on them.  On me, he has over 400 posts alone.  Now, from looking at what he says of me, I can ascertain that the other forum posts are likely done in the same manner, which is twisting what people say, purposely misconstruing “evidence” that he has and interpreting it completely wrong, lying, talking to people and screen shotting only a portion that appears to back his own agenda up.  He’s done this to many people who are listed on his forum like some great wall of shame of his.

My offense for this rendering of shame was not seeing his allure and greatness, as well as his grand following and inviting him on my radio show.  The problem is he has so very many pictures of himself toking pot from a pipe as if he’s the poster boy of how to smoke dope, I just could not connect someone like that with what I do and I told him so.  That conversation was the first post on me that was screen shot with his dribble of complaints added.  Now, I admit that at times, people come off rudely to me; I’ll be a bit overly arrogant just to piss them off.  It’s just what I do.  I had no idea how far this guy would take it.  There are many on this clown forum of his besides me and some are well known.

Doing what I do, I get screen shots when something is amiss from friends, colleagues and just concerned citizens out there when they see something amiss, along with those that are as I put it “underground” and close to people that come forward.  On Rick, it’s an ongoing process and has been for years.

Recently, there was a link posted from an Encyclopedia Dramatica, which is a site dedicated to people who upset people online.  It was made in the idea that some people made Wikipedia articles on themselves and you could not edit to put truths in them, such as people being a scammer or stalker or worse.  Encyclopedia Dramatica (ED) is a satire site, which is to say it’s done in a snarky and joking manner and not meant to be serious, but, makes a point about someone that the article is written of.  Most people are insulted when they get written about on there.  The link went to a Lord Rick Rowe article.  He did not like that. He wanted them to erase the article.  He then, decided he would war with the administrators and owners of the site.  So, he made them each subjects.  Mind you, they did not write the article on him.  He posted insulting things about them seeming to reveal criminal histories and even posting where they lived.  Now, while I can not verify whether what he has there is true or not, I know what I have on me isn’t the slightest bit of truth or anything that was posted about my friends.  So I’ll assume it’s completely not true.

Now these posts of Rick’s get posted all over by him and he regurgitates his post from time to time making it sound like something was just said that might be a few years ago that he’s already brought it up previously.  He wrote I went to jail for kidnapping for 10 years.  I find that funny.  I once took a child out of a dangerous situation and the parent called the police on me to which the police had to initially charge me with kidnapping until they could prove the abuse.  This person lost custody of her child because of it and they dropped the charge on me.  You’ll notice the charge was actually “attempted” kidnapping and you won’t find anywhere that I served jail time.  It does not stop Rick from posting a lie and trying to perpetrate it all over.  Like wise saying how I molested children.  When he did this, I did it back to him, thinking he would see how it felt.  NOPE, instead, the guy just posts what I said and keeps it going.  He can’t understand how his actions cause reactions and why people do react the way they do.  I do not think he cares.

He has threatened me and my family by saying he would show up at my door, taunted me last night through email while threatening.  He posted a picture of my home that he had someone take, as well as posting my address, phone number and names of my family members.  He has recently went after friends that are helping me and posted fake criminal charges they were suppose to have as well as threats and their addresses, that include charges that supposedly their children are suppose to have (but don’t).

I could go on and on about what he has out there and what he’s done.  So if you see me letting him know I’m not intimidated and poking fun at him, you understand that I am the voice of many here and against many other’s out there in the paranormal field like him.  I have met my share of odd people out there with these same types of stalker antics.

It’s time for the paranormal field to stand up to these types of people and object to these kinds of behaviors. Together, we can stop them.  Strengthen our voice by reading our blogs, listen to our shows and like or comment on our posts. The bigger our audience, the bigger our voice and influence on these people.  Feel free to write us for either a report against someone or what you think.  We rarely hear the positive side of what we do.

The truth is out there… the War is ON!  It’s time to clean up the field and make it a true community in every sense.

Evan Jensen, Producer of Beyond the Edge of Reality Radio Network

Lord Rick Rowes Forum; Theatrical Clowns (scroll down below his videos (all slamming me)

Blogs  (Watch for more information on these articles on our blogs.)
http://beyondtheedgeofreality.blogspot.com/
http://hauntedishpeming.blogspot.com/