Kyoto, Japan, 10 April 2014 - His Holiness the Dalai Lama began the day by driving from Osaka to Kyoto, where he was warmly received at Shuchi-in University by the Dean, Ven. Suguri Kouzui, who is also Chief Abbot of the Nakayama Dera Temple. Shuchi-in University traces its origins back to the Shugeishuchi-in or School for Arts and Sciences established in 828 CE in the grounds of the Toji Temple in Kyoto by Kukai or Kobo Daishi, founder of the Shingon Tradition of Japanese Buddhism. It was the first educational institution in Japan open to students without regard to their social or economic status. The present Shuchi-in University was re-established in its current location in 1949.

In the packed hall, His Holiness took his seat on the stage, seated before a statue of Mahavairochana flanked by two sets of his mandalas and began his talk.

“You have requested me to talk about Tibetan secret mantra. Tibetans began to take an interest in Buddhism in the 7th century during the reign of Songtsen Gampo who had taken a Chinese and a Nepalese princess as wives. Both of them had brought statues of the Buddha with them, which were to inspire an interest in his teachings. Later, Trisong Deutsan recognised that Buddhism originated in India and that is where he turned to learn more. He invited Shantarakshita from Nalanda University and it was he who began the dissemination of Buddhism in Tibet. He also instigated the project to translate Indian Buddhist literature into Tibetan, which eventually formed the collections of the Kangyur and Tengyur. He wrote the ‘Ornament of Madhyamaka’, which we still study today, and the ‘Compendium of Reality; the first a work of philosophy and the second a work of logic and epistemology.”

Shantarakshita’s disciple, Kamalashila, also an erudite scholar, was invited later. He had written a ‘Lamp of the Madhyamaka’ and a commentary to his master’s ‘Compendium of Reality’. These two masters took primary responsibility for establishing Buddhism in Tibet. With the first ordinations Shantarakshita established the Mulasarvastavadin Vinaya, while philosophically he was a proponent of the Yogachara-svatantrika-madhyamaka view which combined views of both Asanga and Nagarjuna. He established the Vinaya as the basis of the teachings.

His Holiness explained that Guru Padmasambhava was responsible for eliminating obstacles and today is remembered as the Master in the trio - Abbot (Shantarakshita), Master and King (Trisong Deutsan) - who laid the foundations for Buddhism in Tibet.

As a bhikshu, Shantarakshita upheld the Vinaya himself, his ‘Ornament of Madhyamaka’ indicates that cultivation of bodhichitta as well as an understanding of emptiness were part of his practice, while another of his writings, a small text called ‘Chapter on Reality’ indicate that he also practised Highest Yoga Tantra. In short he was an exemplar of the Nalanda tradition.

This is an approach that can be traced back to Nagarjuna who, taking the Vinaya as the basis, cultivated the awakening mind of bodhichitta through the method of exchanging self and others. His writings also reveal the explicit content of the Perfection of Wisdom Sutras, emptiness, and engagement in the generation and completion stages of Highest Yoga Tantra. His Holiness said that Nagarjuna’s disciples Aryadeva and Chandrakirti followed a similar approach. What this shows is the origin of the Tibetan custom of a practitioner holding the three vows, pratimoksha vows, bodhisattva vows and tantric vows.

His Holiness cited himself as an example. He is a monk; he renews his bodhisattva vows and contemplates emptiness daily and every day engages in six different deity yoga practices.

Regarding the origin of tantrayana, he said that the Four Noble Truths are the basis of all Buddhist teachings and from them are derived the 37 factors of enlightenment, which are also common to all traditions. Then in the Sanskrit tradition we find the Perfection of Wisdom teachings that were given on Vulture’s Peak before gatherings that included disciples like Avalokiteshvara, Manjushri and Samantabhadra. These are the teachings of the Second Turning of the Wheel of Dharma concerning the selflessness of persons and phenomena. They include the Heart Sutra that we all recite, which features a dialogue between Shariputra and the Bodhisattva Avalokiteshvara. This teaching did not take place in public, but before those whose pure karma enabled them to see and hear Avalokiteshvara as well as Shariputra.

His Holiness clarified that while the First Turning of the Wheel of Dharma dealt with the Four Noble Truths, teachings given in public, for which there is a historical record, the Second Turning deals with the Perfection of Wisdom teachings. The Third Turning deals with Buddha nature and the clear light nature of the mind and how to use it. This is the basis of the practice of secret mantra. He explained that the Second and Third Turnings did not take place in public but before a more select gathering of disciples. They are not included in the historical record because that accounts for teachings belonging to the general structure of the doctrine, not teachings that were given for specific disciples.

His Holiness stressed that great Indian masters like Nagarjuna and Aryadeva have examined these issues with reason and logic and vouched for the authenticity of the Sanskrit tradition, the practice of the bodhisattva vehicle, the perfection of wisdom vehicle and the vehicle of tantra. He quoted Chandrakirti describing five stages of tantra:

He said that the generation stage involves the visualization of deities. In Highest Yoga Tantra this also involves taking the Buddha’s three bodies, the Truth Body, Complete Enjoyment Body and Emanation Body into the path through the processes of death, intermediate state and rebirth respectively. Whereas the Sutra literature speaks of taking three countless aeons or more to reach Buddhahood, tantric texts speak of doing so in one life in the one body.

Among several questions, His Holiness was asked what he thought of the suggestion that Kobo Daishi, who apparently died in the 9th century is still in meditation. He answered that it was possible. There accounts of great adepts in the past attaining enlightenment and remaining in meditation until the next Buddha appears in the world, Tibetan masters among them. He was also asked about compassion in relation to Avalokiteshvara and replied that compassion is said to be the root of the attainment of Buddhahood. He said he had already mentioned Avalokiteshvara’s role as a person participating in the dialogue of the ‘Heart Sutra’, but there is also the aspect of Avalokiteshvara the bodhisattva embodying all the Buddhas’ compassion, much as Manjushri is said to embody all their wisdom.

“Finally, in this place which has a special connection to Kobo Daishi,” His Holiness said, “I’d like to thank you Japanese followers of the Buddha for this opportunity to hold discussions with you,” and presented the Dean with a statue of the Buddha.

Ven. Chijun Suga, President of Dosokai and Chief Administrator of the Zentsuji Temple in Shikoku where Kobo Daishi was born, in his words of thanks expressed gratitude to His Holiness for coming. He mentioned that followers of all Buddhist sects had attended the talk. He requested His Holiness to maintain his connection with the University because of its strong links to Kobo Daishi. He concluded saying:

“All of us pray for peace in Tibet and that His Holiness may have a long life.”

Original link: http://www.dalailama.com/news/post/1108-explaining-tantra-in-tibetan-buddhism-at-shuchi-in-university
Posted by eyeontheparanormal at 4:59:00 PM No comments:

Showing the facts. That none of it was true. And it was not only the professional actors who acted.

I spent 10 hours making it but well worth it. Hopefully, it give Norma Sutcliffe [the homeowner] some peace. And it clearly shows what bad liars the Perrons and the Warrens are. I pointed out the Warrens. She was lucky enough to find a story from a former member who worked with them. Click link to watch the video.

Also, Tony Spera (Lorraine's son-in-law) wrote the following article in 1985. Now remember he is the researcher. Why does he write about it? Why mention murders,vicious beatings, witchcraft and sacrificing a child when none of it is true? We Just proved none of it was or is true. Doesn't sound like research to me. 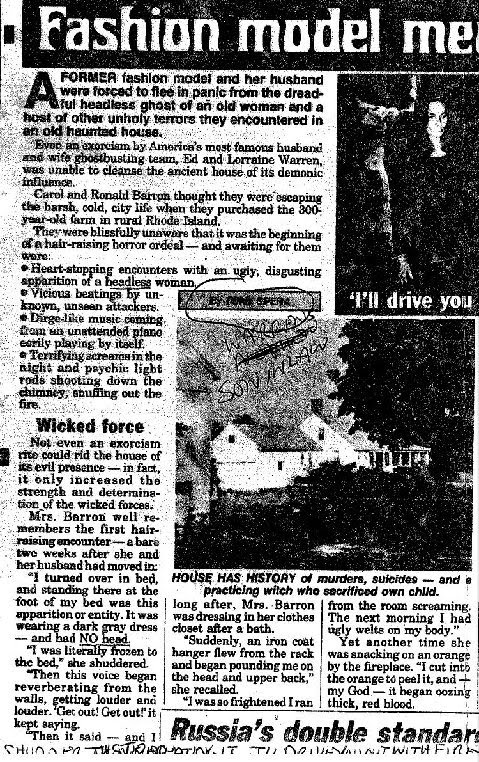 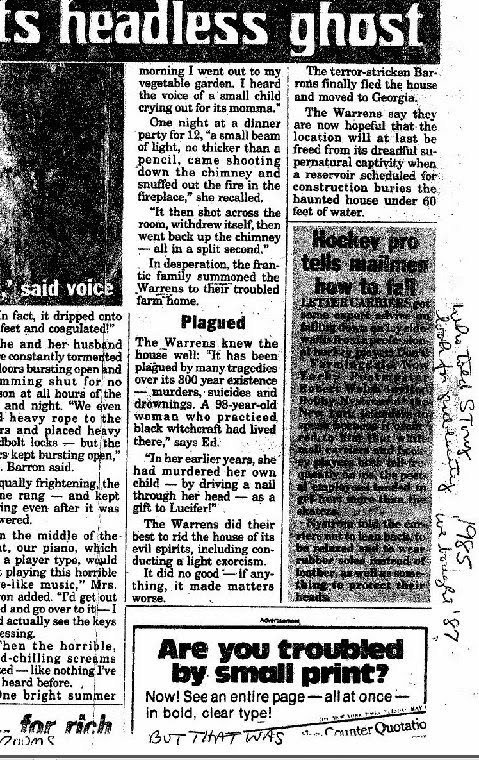 Posted by eyeontheparanormal at 8:31:00 AM No comments: