Peter Pops-Off At The Mouth

So I've been bragging about my newest BFF Peter Popoff right? I know you have all felt at least a small ping of jealousy as you read about what Peter had done,was doing, and would do for me. One of my less loyal friends (Tim) who saved me from a burning building a couple months ago even told me "Dude I wish there was some way I could be as selfless as Peter Popoff. I'm sorry Reap, I just do the best I can." I looked at him and replied "Yea if all my friends were as devoted as Peter it would be like I was in heaven. You are only human man and I accept you as you are"  Then the nurse had to wheel Tim into his therapy session. It'll be a couple more months before he gets out of the hospital. 3rd degree burns can really screw you up I guess. I only got 2nd degree burns from the fire. The EMT said something must have been shielding me...weird huh? I didn't even know Peter then so it couldn't have been him...

Anyways, I know a friend like Peter is hard if not impossible for most people to find, but lately.......well......this best friend stuff is something Peter Popoff seems to take pretty seriously.

I got another letter from him a couple days ago, this was number 4...or maybe number 5. It's getting hard to keep track.

Peter now refers to me as 'brother' and it kinda creeps me out cause I'm pretty sure he is older than dirt, that would make him close to a century older than my mother.Besides I got my ass kicked a lot of times when I was younger and Peter never had my back once! Once I start looking closer at some of the behaviors Peter Popoff has been demonstrating I start seeing the pieces forming a disturbing puzzle.

Take the ring I received  for example. Peter bought it for me. He expects me to wear it around, put it in an envelope with some of my hard earned cash and then send it back to him! I have been in some dysfunctional relationships in my life but this is bad. Peter hasn't even taken me out to dinner yet. In fact, I have paid for everything up til now and I haven't gotten anything to eat yet. Besides I can't wear that thing, gold looks horrible on me.

The next thing I  get from Peter is another of his letters. This letter, just like the rest, is more of Peter crying and yelling about the devil. He also continues to point out my flaws. 'I lost my job' 'I can't pay my bills' 'I'm a nervous wreck'  none of those things are even true! I can picture Peter telling god all these things to make me look bad. Boy am I glad I don't believe in god or I'd REALLY be pissed!!

Included is some cheesy sticker I'm supposed to put on the bottom of my shoe. There is a packet of what looks like tiny pieces of  charcoal you would use to grill tiny little steaks. Peter says its 'magical' but it didn't even cook the steaks.

Then Peter asks me for more money! The nerve of this guy! At this point I'm still waiting for the debt money to cover all my bills so I can pay god back for giving me money that Peter got for me. I briefly consider asking Peter for a loan so I can pay him to pay god so I can ask god for another loan and then give the money to Peter so he can use it to pay ......some angels... I think.... this is really getting confusing. I take some of the money that was to go to Peter and buy some aspirin, I'm getting a headache.

A few days later....I'm just starting to forget my stalker brother. The whole crappy bar-b-que fiasco is a fading memory when my daughter comes in from checking the mail and says "Here dad" I look at her outstretched hand. She is holding several envelopes, one of them is pretty thick. "This one is pretty heavy" she says as I take the stack of off-white envelopes from her. I look down into the handful of mail and I see Peter has sent me another....something. I open the envelope while trying to remember where I had put those aspirins. Inside I find this...

Peter Popoff keeps sending me gifts...I can't help but think he wants something from me in return....like money

I almost expect a marriage proposal to be included in Peter's 5 page rant but there isn't one. There is a request for money, again. The request comes after instructing me to do several moronic tasks which seem to be another attempt at destroying any dignity I may have left.

The letter goes on (where are those damn aspirin?)

Answer 3 questions, find 5 divine personal priorities, 24 hours later receive first of  7 life-changing miracles. Now my head is spinning. How the hell am I supposed too remember all this? I'm gonna have to buy some kind of date-planner to write all this down or I may miss a life-changing miracle and then I'll be totally screwed. You don't see many (if any) miracles these days. If Peter somehow got god to do some miracles for me I gotta make sure I see them or god will probably think I am ignoring him. I really don't want to burn in hell for all eternity, that's not on my 'to-do' list.

I keep reading only to find out Satan has been stealing from me! I wondered where all the forks had gone! My silverware drawer used to have a bunch of forks in it but the other day I went to get one and there were 2-3  to be found. That son of a bitch Satan must have took the rest of them. He is even worse than the bible says. Now my discomfort about Peter's behaviors is gone, I need Peter to help me or pretty soon I won't have and spoons to eat with either.

Ok Peter now tells me he has had a vision. I have to follow his directions to get tangible and irrefutable proof of my bank account being stocked with 'fabulous divine transfers of SUPERABUNDANT BLESSINGS' Who cares if Satan forked himself with my stuff? I'll just buy new forks myself!

Not only that I'm supposed to hold up the check and say GOD I HONOR YOU AND  YOUR WORK, AND I SOW THIS $27.00 FAITH SEED FOR A GREAT HARVEST I TAKE WHAT I HAVE AND GIVE IT TO YOU, BECAUSE WITHOUT YOU I WOULD HAVE NOTHING....I SOW THIS FAITH SEED OF $27.00 IN JESUS' NAME I ACCEPT YOU NOW AS MY TOTAL SOURCE OF SUPPLY! AMEN"

Screw that. I have no money because I gave it all to Peter already, if he is so wonderful at seeing into the future and having visions all the damn time, and talking to god he damn well should know that. Come to think of it I don't think Peter Popoff is talking to god . If there was a god wouldn't he/she/it/they already know I'm broke?? And if there was a god wouldn't it have better things to do than play circle-jerk with $27.00?

The rest of Peter's letter is just more of his blabbering on about how I must do stupid human tricks in order for him to help me.I've come to the conclusion Peter is after my hard earned cash. It's almost as if I've had a vision. I'll keep you posted, I just got another letter in the mail.... 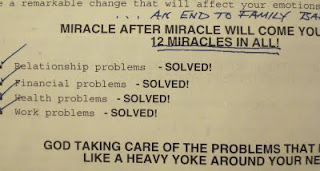 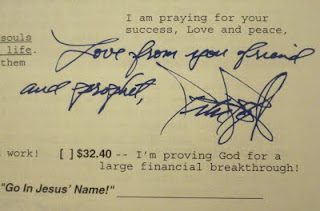 Posted by eyeontheparanormal at 6:59:00 AM No comments: