October 27, 2008 was the original air date for Paranormal State's most controversial case. For the past four years the debate over how real or fake that "I Am Six" episode was still hasn't calmed down.

Now, after an exclusive investigation involving a team of reporters and investigators, the hidden truth will come to light. 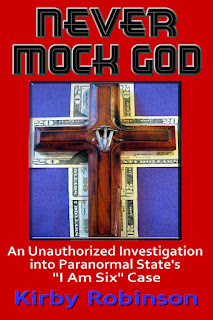 This book contains many facts that those involved with that show don't want you to know. The final pages expose a secret that even over the past few days they have tried to keep from the public. Never Mock God – An Unauthorized Investigation into the "I Am Six" Case will be offered in eBook format at Amazon, B&N and Smashwords.

We hope to have it available by October 27th, but, if not, to paraphrase Orson Welles from his wine-selling days: "we will sell no book before its time…"

And, as it'll be Halloween in exactly one week, I’d like to share my Top 10 Favorite Horror movies with you.

10] Return of the Living Dead Part II, 1988 – A campy yet at times very frightening take on zombie movies. This movie is as good as anything we’ve ever done in this century when it comes to portraying the living dead!

9] The Exorcism of Emily Rose, 2005 – Probably the best film to present what it feels like to be possessed by a demon. Even more frightening because it’s based on a true story.

8] Dracula, 1931 – This black and white movie starring Bela Lugosi might be dated. It might not have the special effects, and the script might be a little bit lame at times. But on a dark and stormy night with the lights out, a bowl of popcorn, and a cold root beer, it can still give you the creeps.

7] Alien, 1979 and Aliens, 1986 – The tagline for the first one is “In space no one can hear you scream.” And if you watch this alone no one in your house will hear you scream. Get the director’s cut if you can and both Alien movies keep the shocks coming!

6] Halloween, 1978 and Halloween II, 1981 – The original Halloween, in my opinion, is nonetheless the best slasher movie. And the unique thing about the second one is the beginning is actually the end of the original. Michael is still a guy you wouldn’t want to run into on Halloween night.

5] The Haunting, 1963 – It may not have the shock value that the others have but it’s one of the best portrayals of what a sensitive really goes through.

4] 13 Ghosts, 1960 – The special effects may be outdated but its unique take on the afterlife still gives me chills.

3] The Exorcist [The Version You’ve Never Seen], 1973 – Yes, that’s how it’s now titled and if you’ve not seen this version with four new scenes and a longer running time, this movie is even scarier than the original version.

2] The Shining, 1980 – As good if not better than the Stephen King book it’s based on. Shows a very accurate look into being a sensitive as well as how demons seduce individuals into becoming possessed.

1] Dominion: Prequel to the Exorcist, 2005 – This is a film that many have never seen or even heard about. It’s what leads to the foundation of the Exorcist that would come later. Not a special effects extravaganza, but highly accurate when it comes to the confrontation between the exorcist and the demon.

Honorable Mention: Paranormal Activity movies 1-3 [and the fourth when it's available on Netflix/DVD.

Any of these movies I would highly recommend especially this time of year!

EARN EXTRA MONEY! If you have a website, forum or blog you can set up an Amazon Associates Affiliate Program link and sell the Kindle version of INVESTIGATING PARANORMAL STATE, PARANORMAL STATE EXPOSED and PARANORMAL TEACHINGS: THE BEST OF SHEDDING SOME LIGHT and earn money. You can also sell other books and products that Amazon offers. Here's the link https://affiliate-program.amazon.com/
Posted by eyeontheparanormal at 8:53:00 AM

To the horror selections I'm adding one of the biggest cult classics ever... H. P. Lovecraft's "Re-Animator" ..