Interview with Oliver Phipps, Author of "The House on Cooper Lane: Based on a True Story" 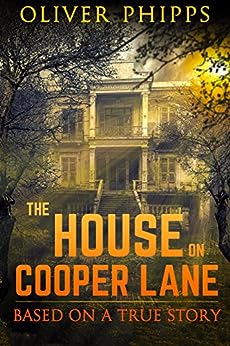 It's 1984 and all Bud Fisher wants to do is find a place to live in Madison Louisiana. With his dog Badger, they come across a beautiful old mansion that was converted into apartments.
Something should have felt odd when he found out nobody lived in any of the apartments. To make matters worse, the owner is reluctant to let him rent one. Eventually he negotiates an apartment in the historic old house, but soon finds out that he's not quite as alone as he thought. What ghostly secret has the owner failed to share?
It's up to Bud to unravel the mysteries of the upstairs apartments, but is he really ready to find out the truth?

A woman screamed somewhere above Bud. Opening his eyes, he looked straight up at the ceiling of the living room. The creaking of ancient floorboards above him indicated someone walking fast towards the direction of the scream. The footsteps followed the same path as before and faded off past the old fireplace.
Bud struggled to wake up. Badger ran around the living room, growling upwards at the sounds above. Bud stood up, still gazing at the ceiling; he started towards the bedroom to get his club, but stopped in his tracks before taking another step. The double doors to the bedroom were closed. He didn't close them; he was sure he didn't.
Fear crept up the back of his spine with a cold chill. His hair tingled. He rubbed the back of his neck trying to make it quit. He walked to the doors and attempted to open them. They wouldn’t open. He looked through the glass windows and saw his club beside the bed. He quickly considered breaking the glass as he paced around the living room still rubbing the back of his neck. Someone must be in trouble; a woman must be in danger upstairs. Or was it his imagination? The doors certainly weren't. He should do something. The young man couldn't relax as he felt the need to take action immediately. There may be no time to seek help.
He grabbed the car keys and the key to the other rooms from the coffee table and jogged out the front door. He opened the trunk of his car and rummaged around for a flashlight. An old one was located and he turned it on. The light worked but not very well. Badger stood close, right next to his leg. The young man dug around some more and found a tire iron. He swung it a little to get a feel for how it handled and then quickly started around to the back of the house.
The darkness was stifling as Bud moved with caution along the side of the large gloomy old house. The flashlight emitted a weak light but it didn't falter. Bud chided himself in a low voice for not having a better flashlight in the trunk. The steps came into view and appeared threatening in the darkness. He shined the light up the stairs and briefly hesitated.
Taking a deep breath he glanced down to Badger in an effort to reassure himself of not being alone. He braced himself and slowly made his way up the stairs. His legs felt heavy; sweat trickled down the side of his face. He wiped the sweat off with his right shoulder and looked back. Badger was cautiously following him as he'd hoped. The door now came into view. Shining the light on the door he found the lock was still in place.

Why did you write this book?
It was a frightening, real life experience for me and I've always wanted to share it with others. As I moved further into professional writing, I knew it was one of the first stories I would put together. And it seems a lot of people are interested in the story as it has been my best-seller overall.

How did you come up with the title?
Well, Cooper Street is a real location, and though I'll not disclose too much more, it does have a connection to the actual place represented in the story. That being said, I published the work as fiction and deliberately so. As the real story played out, it may not have been as exciting in the sense that it was over a longer period of time. Basically, as in combat, there were short periods of terror and long periods of boredom. As I mention in the introduction of the book, I arranged the events in a much more compact time frame, to avoid the lengthy "quiet" spells in between.
In this line of thought, the title also has connections to the original house, but I again made some adjustments to avoid compromising actual people or places. In short, the title came about in an effort to keep some real connections, without disclosing actual places.

How did you choose your genre?
I really prefer to write in various genres. Of the eleven titles published under my real name (Oliver Phipps), three are paranormal, two are science fiction, five are historical fiction and one is a non-fiction work.
The choice for this book however was more difficult than one might think. The story is not actually a "horror" story. There's no killing or "blood and guts" as one might find in a horror story. Yet, that might seem an appropriate genre. Also, I initially placed this book in the "ghost" genre, only to change it later to Young Adult, ghost stories. What I found out was that adults don't mind reading young adult books, if they're interested in them. But this book, being about a teenager living in a haunted house, was very interesting to young adults. So, it took a bit of experimentation before getting it in the best genre category.

What inspired you to be a writer?
I've always had an interest in writing. But I suppose the thing that moved me towards writing seriously would be some stories I wrote for a family newsletter. They were sort of silly and fun. But everyone liked them and I still get requests to write more of them. I think the notion that I could do something that made people laugh or simply feel entertained was an inspiration in itself. A few years after these writing efforts, I was embarking on my first book.

Are you writing another book?
I am. Actually I have several in the works. I tend to produce better if I work on more than one project at a time. By that I mean, I will work on one book for a while and then shift to another while I'm ironing out some plot issues or story line. Then I will move back to the first one for a bit.
If all goes well, I'll have a new novel out by spring of next year. 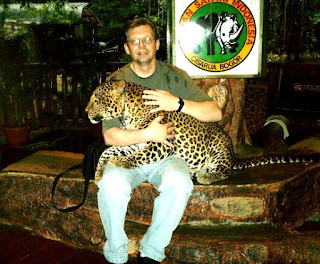 Oliver Phipps is an author, entrepreneur and adventurer. He served as a Paratrooper in the United States Army and studied at MSC.
In 1997 Oliver and a good friend put together an expedition plan for traveling to Northern Canada and Alaska in order to prospect for gold.
Leaving in April of 1997 Oliver and company traveled up the historic AL-CAN highway. After exploring the Yukon and Northwest territories of Canada as well as the Arctic Circle the team traveled over the Top of the World highway to Alaska.
1999-2000 Oliver traveled through Asia, visiting Indonesia, Japan, Singapore, Malaysia and Taiwan among other countries.
In 2004 Oliver published his first book and continues to write books, articles and short stories. Currently Oliver and family reside happily in the U.S.

Posted by eyeontheparanormal at 6:42:00 PM

I love this story. It's short, but knowing that it really happened to Oliver makes it really special. Very spooky.