A recent review: "This is one of the most fun stories I've read in a long time. I could not put it down and read it all in one day. I loved how the author mixed present day with the past. The author did not fill the book with a lot of ridiculous, boring details, unlike so many other authors. The level of details was perfect. I felt she had a perfect mixture of everything one could want in a good book, ie: Drama, Mystery, Action, History, Humor and Romance."

Set during the War of 1812:
In the fall of 1809 Grace Wisher, a young slave girl, escapes the plantation to live her life in the port city of Baltimore, Maryland. She is indentured to Mary Pickersgill who teaches her the skill of sewing flags and standards. Yet Grace is hiding a terrible secret, one men will murder for even hundreds of years later.

In the present, Keiko Zorben is finishing her master's degree by working as an intern at the Smithsonian Institute. While archiving mislabeled letters, she finds a clue to the whereabouts of the missing star from the Star Spangled Banner. For over two hundred years its location has been a real-life mystery, until now.

Keiko asks the handsome Dr. Julian Lone Wolf, the head of the American Indian Studies Department, to join her on her search for the missing star.

When a docent is murdered and an attempt is made on their lives, Keiko and Julian realize finding the missing star and the secret it holds, is their only key to survival. 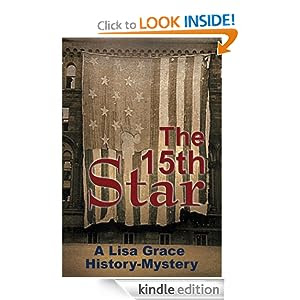 Posted by eyeontheparanormal at 8:56:00 AM

Wow thank you Lisa, just downloaded it to my kindle..