7 Questions for the Dalai Lama 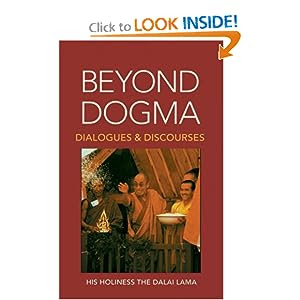 The following questions and answers were initially published in the 1996 book Beyond Dogma: The Challenge of the Modern World. That book is no longer in print but another volume from the 1993 teaching His Holiness gave in France is: Beyond Dogma: Dialogues and Discourses.


Q: Your Holiness, you have just visited a Catholic shrine. Do you hope to one day go to Jerusalem or Mecca?

A: I am particularly happy to have gone today, in person, to the shrine at Lourdes, the heart of this holy place of pilgrimage I had heard of in the past. I was deeply moved.

Of course I have been attending services and taking part in interreligious exchanges for a long time. For two years I have been planning to do a major pilgrimage to holy places in the company of representatives of other religions. When we visit such places we benefit from their atmosphere, we pray together, or we may simply meditate and commune with our thoughts in silence. I have already done this in India and am happy to begin again today. I believe these sites awaken in us a feeling of communion and understanding much greater and deeper than a simple intellectual comprehension. I would like very much to begin such a pilgrimage by visiting Jerusalem and Mecca, but I do not know when circumstances will allow me to go there.

Q: Have you and the other representatives discussed among yourselves the issues raised by conversion, changing from one religion to another, in particular the different forms of Protestantism, Catholicism, or even Buddhism here in France?

A: In our private meeting, a Christian quoted to me an inscription of King Ashoka, which speaks of how intolerance towards other religions can destroy one's own religion; how the prosperity of a religion is linked to respect for other religions.

Q: What do you think of the work of solidarity taking place between Christians in the West and in China?

A: Christians have always been a minority in China, and they have suffered as such. Moreover, the lack of communication due to the political regime has certainly limited their vision of the international situation. I think, therefore, that any dialogue that can be established with Christians outside China can help them to open their minds to the realities of the world.

Q: Do you think it is possible to be both Christian and Buddhist at the same time?

A: I ... replied to this question indirectly when I said that belief in a Creator could be associated with the understanding of emptiness. I believe it is possible to progress along a spiritual path and reconcile Christianity with Buddhism. But once a certain degree of realization has been reached, a choice between the two paths will become necessary. I recently gave a series of teachings in the United States and one of these teachings was about patience and tolerance. At the end there was a ceremony for taking the Bodhisattva Vows. A Christian priest who was in the audience wanted to take these vows. I asked him if he had the right to, and he replied that yes, of course, he could take these vows and still remain a Christian.

Q: Christ's words "Love thy neighbour" embody for us the Christian religion. What is your message to humanity when you meet another human being?

A: Love of one's neighbour, kindness, and compassion--these are, I believe, the essential and universal elements preached by all religions. In spite of divergent philosophical views, we can establish harmony among all spiritual traditions on the basis of these common traits of love, kindness, and forgiveness. I always insist on this point and devote a great deal of energy to it. Most difficulties between religions come about because of people who, having failed to transform and bring peace to their own minds, not only apply their own beliefs yet are all while to impose them on others. This unfortunate behaviour can provoke serious conflicts, although I have noticed a considerable re-conciliation between the different religions, more particularly between Tibetan Buddhism and Christianity. We have actually set up a very constructive programme of exchanges between monks and nuns of our two traditions.

Q: What are the ten virtuous acts spoken of in Buddhism?

A: Three concern the body: one must not kill, steal, or engage in sexual misconduct. Four others are verbal: do not lie, defame others, speak offensive words, or engage in frivolous conversation, which relates to everything that might be said under the influence of afflicting emotions. Finally, the last three virtuous acts are of a mental nature: do not develop covetousness or malice and, finally, do not hold false or perverted views, such as the extreme view, close to nihilism, which totally denies spiritual perfection.

What we mean by "erroneous views" generally includes absolutist, eternalist, and nihilistic views. But in the context of the ten virtuous acts, only nihilistic views are implicated. It is therefore on the basis of a lifestyle disciplined by ethics that one abstains from committing the contrary acts, the ten non-virtuous acts. When faced with a situation where you might possibly commit such negative acts, you abstain from committing them. A life rooted in ethics has at its foundation the abandonment of the ten non-virtues in favour of the practice of their opposites.


Q: If we have committed a serious negative act, how can we let go of the feeling of guilt that may follow?

A: In such situations, where there is a danger of feeling guilty and therefore depressed, the Buddhist point of view advises adopting certain ways of thinking and behaving which will enable you to recover your self-confidence. A Buddhist may reflect on the nature of the mind of. a Buddha, on its essential purity, and in what way disturbing thoughts and their subsequent emotions are of an entirely different nature. Because such disturbing emotions are adventitious, they can be eliminated. To think of the immense well of potential hidden deep within our being, to understand that the nature of the mind is fundamental purity and kindness and to meditate on its luminosity, will enable you to develop self-confidence and courage.

The Buddha says in the Sutras that fully enlightened and omniscient beings, whom we consider to be superior, did not spring from the bowels of the earth, nor did they fall from the sky; they are the result of spiritual purification. Such beings were once as troubled as we are now, with the same weaknesses and flaws of ordinary beings. Shakyamuni Buddha himself, prior to his enlightenment, lived in other incarnations that were far more difficult than our present lives. To recognize, in all its majesty, our own potential for spiritual perfection is an antidote to guilt, disgust, and hopelessness. Nagarjuna says in "The Precious Garland of Advice for the King" that pessimism and depression never help in finding a good solution to any problem. On the other hand, arrogance is just as negative. But to present as an antidote to it a posture of extreme humility may tend to foster a lack of self-confidence and open the door to depression and discouragement. We would only go from one extreme to the other.

I would like to point out that to set out on a retreat for three years full of hope and expectations, thinking that without the slightest difficulty you will come Out of it fully enlightened, can turn into a disaster, unless you undertake it with the most serious intentions. If you overestimate your expectations and have too much self-confidence, you will be headed for dissatisfaction and disillusionment. When you think of what the Buddha said--that perfect enlightenment is the result of spiritual purification and an accumulation of virtues and wisdom for eons and eons--it is certain that courage and perseverance will arise to accompany you on the path.
Posted by eyeontheparanormal at 7:59:00 AM No comments: