I have decided to hijack this blog this time, because, there are just some things that I feel are imperative that need to be said and although some can certainly speak for themselves, at times it is through the eyes of another that people truly see who another is.

My name is Darlene Watts.  I generally just edit blogs, writing or co-write with Evan Jensen in a consorted effort and write my own blog, “Haunted Ishpeming” (Ishpeming is the town I live in, pronounced “Ish-pa-ming” meaning high place, close to the creator or to some “heaven” in Ojibwe (Chippewa) Native American.

For this though, after seeing what is continually put out there against Evan, which borders on sheer lunacy at times and the readers NOT knowing who Evan truly is where by a certain amount of chaos ensues, it’s time that people see a different and altogether more personal perspective not only of Evan, but, of Kirby Robinson as well.

Now, as many that have a deep connection and draw to the paranormal and helping others in this manner that involves the spiritual and often religious areas of people’s lives, there is a connection to a higher power and to the spiritual.  It is what motivates both Evan and Kirby.  I call it being spiritually drawn.  Their actions have very little to do with anything other then trying to do what they are drawn to do that is right and it has NOTHING to do with being famous or any other goal.  In fact, exposing people is by its very nature, a degrading, insulting and often thankless effort and when people do understand and appreciate the effort, most often one never knows it.  For doing this kind of exposing makes one a target, as well as those outwardly being proactive or even suggesting they are behind these actions or even appearing to be endorsing them.  Those that are exposed often glory in the chaos and cruelty they unleash on others that appear to be in some theorized conspiratorial pursuit of them as some sort of retaliation they always do.

I did get permission briefly to do this from Evan, whom was a bit leery of me doing such a subject and writing it myself.  He is just not much of a self promoter in endorsing someone doing what it is I mean to do.  He is a very modest guy with a big heart.

Evan is happily married to a woman that he’s been married to for over 20 years.  She is NOT a mail order bride and assuming so because of her nationality is at best shallow and racist.  She is Philippine and he met her in another country that was not the Philippines.  The story to HOW he met her probably is as remarkable as Evan truly is.  Imagine going to another country and hearing the voice of an angel singing in a mall that he follows her voice and finds this beautiful lady with the voice to match that he falls in love with.  Personally, I take offense at those speaking of this woman in any way shape or form in some insulting way.  She is not even involved here; yet, these people see no problem bringing in family members that are not involved in to ridicule in an effort to shame the person who puts out the truth about them, even when they probably did something first in the insulting and cruel arena.  (Rick Rowe did and was the aggressor way before Evan was.)

Evan did not only serve time in the service of his country, he was injured severely almost losing his life where two other of his close friends and troupe members were killed.  Thereby the grace of God Evan survived.  But, it is the reason he does not speak of it.  He is a hero to this country.  (Although, never considers himself a hero.) I have always had the information to what he did and who he is soon after the criticism flew.  I did not even have to ask him for it.  He sent it to me on his own.  But, I’ll tell you, anyone that knows Evan will know of the truthfulness of whom he once was just speaking to him at lengths.  He is tough and even ruthless when someone challenges him, like the soldier he still is.  It is in who he is as well as his outlook and how he lives today.  So much so, I joke that he is Rambo. Let me just say here, he’s probably NOT the guy you want to tick off for that reason.  He will defend others to a fault and is entirely fearless in doing so.

I have never known anyone to care more for others then Evan and be as entirely selfless as he is.  People should know that Evan is actually considered terminally ill.  Now, when people come to him that tells him they are being bullied, he doesn't just sit on the sideline, he actively does something about it.  How many people would help others when they were facing such an uncertain future?  Frankly, Evan has my admiration for his stance here. By gosh, he seems to be the only one going after these bullies as well.  How is that?  The guy that is willing to stand up to these people who gather together like a gang of thugs, is actually terminally ill.  And these people think they are all big and bad getting on him while never admitting what he finds and post proof of and never EVER even refuting it.

As for the numb nut that put out Evan was guilty of kidnapping and had the nerve to lie and say he served 10 years, talk about the pulling crap out of your hat.  First of all, he took a child out of a very dangerous situation and for a moment, was charged with kidnapping until it was clear what was going on.  It was a matter of formality and of the law.  The charge was dropped and the parent lost custody of their child.  The kidnapping charge should not even be showing up and even so, it is listed for the wrong year, as he was still in the service at that time and not even in the states.  So, we are not even sure they didn’t just manufacture it and its coincidence that there was a story that somewhat matches, but as far the prison time though, that never happened.  I would like to think anyone would do as Evan did and stand up for a defenseless innocent child.

Here are some things people should know about Evan, he saves animals.  He tends to have such a big heart, that he feeds a wild squirrel that has gotten to know him and beg every morning for food.  The dog he has was a rescue directly from rescuing her from an abuse situation that was going on and he interjected.  Imagine, seeing a dog abused, putting yourself in harms way to stop it and taking the dog home to keep her safe and give her a better life.  Evan is bold this way, but, he’s never unreasonable and doesn't ever go after anyone that has not provoked him in some way.  My advice to people, don’t provoke him.  He is very intelligent.  Albeit his eyesight isn't so good right now he misses his grammar and punctuation mistakes, he is higher then average intelligence by far.  People are often underestimating him and who he is.  YOU WILL NEVER INTIMIDATE THIS MAN, no matter what you do.  Don’t want issues with Evan, don’t lie and cheat people and DON’T bully them and do not stand behind these people that are criminals.  If Evan warns you and you do not at least ask questions and find out if at least what he is saying is true or not and you blindly endorse a criminal after you were told, expect that he will indeed show people how you have a lack of ethics and endorse a person that would steal or endanger the public for your own gain.  It’s really simple.

Me, I’m just an artist that has grown up around Native Americans and because I did, have a different outlook on life and tend to have learned a lot of lessons in life that have proven much of what I learned from family members is indeed truth and valuable.  I am sometimes completely shocked that I have so much in common with Evan being who he is.  I do not back down either and have learned that humility is a good teacher and have no problem showing people their own humility when they mistreat others.  I do not run afraid either and am also spiritually drawn.  I live my entire life on instincts as that is how I grew up.  If something feels right or does not, I will base my decisions on that feeling I pick up on.  I go by my gut all the time.  I have to say on this, Evan has very sharp instincts for figuring out what is going on and how to deal with it.  He knows how to investigate like nobodies business.  He knows how to deal with thugs and bullies in a way that may seem harsh to some people unless you see all of what these people are doing and understand how long they have done it.

The people we are bringing out have a wake of people behind them that they have upset and have had enough of them.  It is how it is.  We have not once gone after one of these people.  They spar with us first and reveal themselves just by being friends with someone they attack and being behind them.

I want to say a few words here about myself and Kirby.  We go back years now and were not always on the same side of the fence.  One thing I can say of Kirby is that he is spiritually drawn, uses his instincts and prayer to do what he does.  He has always been a spiritual teacher of sorts and spiritual person.  That is what he was when I first met him online.  He is very loving and to tell you the truth, he is not some ruthless cruel person some make him out to be.  I have been doing fraud exposing before even Kirby did.  But, like a lot of people doing it for the right reasons you burn out and get tired of the daily drama and chaos and have to take breaks from it.  I've always been in the background doing this since the Paranormal Police.  Kirby is most certainly the most effective, longest running fraud exposer out there and has earned a following for his courageous and often controversial stand to stop the fraud and abuse out there.  After all, if people put lies out there about the spiritual world, they are hurting the spiritual world and anyone that does not know they are lying. They are no different then false prophets.

Graphic artist, editor, co-host and publicist for Beyond the Edge of Reality Radio Network.

On behalf of Evan Jensen.

Producer and host to Beyond the Edge of Reality Radio Network.

The Hub of all we do is now here! 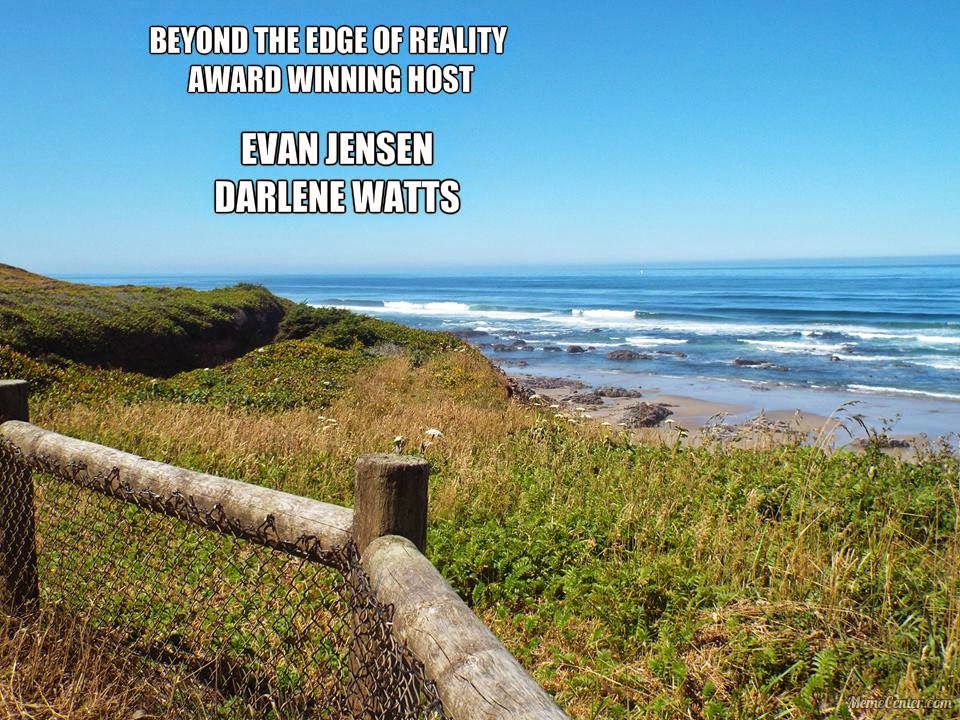 Posted by eyeontheparanormal at 3:44:00 PM 9 comments: