By The Dalai Lama 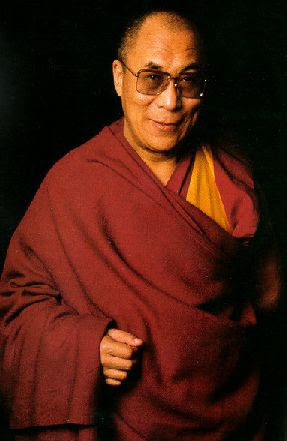 No matter what country or continent we come from we are all basically the same human beings. We have the same common human needs and concerns. We all seek happiness and try to avoid suffering regardless of our race, religion, sex or political status.


Human beings, indeed all sentient beings,
have the right to pursue happiness and live in peace and in freedom.
As free human beings we can use our unique intelligence to try to understand ourselves and our world. It is very often the most gifted, dedicated and creative members of our society who become victims of human rights abuses. Thus the political, social, cultural and economic developments of a society are obstructed by the violations of human rights. Therefore, the protection of these rights and freedoms are of immense importance both for the individuals affected and for the development of the society as a whole.

Some people think that causing pain to others may lead to their own happiness or that their own happiness is of such importance that the pain of others is of no significance. But this is clearly shortsighted. No one truly benefits from causing harm to another being. Whatever immediate advantage is gained at the expense of someone else is short-lived. In the long run causing others misery and infringing upon their peace and happiness creates anxiety, fear and suspicion for oneself.

The key to creating a better and more peaceful world is the development of love and compassion for others. This naturally means we must develop concern for our brothers and sisters who are less fortunate than we are.

We need to think in global terms because the effects of one nation's actions are felt far beyond its borders. Respect for fundamental human rights should not remain an ideal to be achieved but a requisite foundation for every human society.


When we demand the rights and freedoms we so cherish
we should also be aware of our responsibilities.
If we accept that others have an equal right to peace and happiness as ourselves
do we not have a responsibility to help those in need?
All human beings, whatever their cultural or historical background, suffer when they are intimidated, imprisoned or tortured. We must insist on a global consensus not only on the need to respect human rights world wide but more importantly on the definition of these rights.

Some Asian governments have contended that the standards of human rights laid down in the Universal Declaration of Human Rights are those advocated by the West and cannot be applied to Asia and others parts of the Third World because of differences in culture and differences in social and economic development. I do not share this view and I am convinced that the majority of Asian people do not support this view either, for it is the inherent nature of all human beings to yearn for freedom, equality and dignity, and they have an equal right to achieve that. I do not see any contradiction between the need for economic development and the need for respect of human rights.

The rich diversity of cultures and religions should help to strengthen the fundamental human rights in all communities, because underlying this diversity are fundamental principles that bind us all as members of the same human family. Diversity and traditions can never justify the violations of human rights. Thus discrimination of persons from a different race, of women, and of weaker sections of society may be traditional in some regions, but if they are inconsistent with universally recognized human rights, these forms of behavior must change. The universal principles of equality of all human beings must take precedence.

It is mainly the authoritarian and totalitarian regimes who are opposed to the universality of human rights. It would be absolutely wrong to concede to this view. On the contrary, such regimes must be made to respect and conform to the universally accepted principles in the larger and long term interests of their own peoples. The dramatic changes in the past few years clearly indicate that the triumph of human rights is inevitable.

There is a growing awareness of peoples' responsibilities to each other and to the planet we share. This is encouraging even though so much suffering continues to be inflicted based on chauvinism, race, religion, ideology and history. A new hope is emerging for the downtrodden, and people everywhere are displaying a willingness to champion and defend the rights and freedoms of their fellow human beings.

Brute force, no matter how strongly applied, can never subdue the basic human desire for freedom and dignity. It is not enough, as communist systems have assumed, merely to provide people with food, shelter and clothing. The deeper human nature needs to breathe the precious air of liberty.


Some governments still consider the fundamental human rights of its citizens an internal matter of the state. They do not accept that the fate of a people in any country is the legitimate concern of the entire human family. Claims to sovereignty are not a license to mistreat one's citizens. It is not only our right as members of the global human family to protest when our brothers and sisters are being treated brutally, but it is also our duty to do whatever we can to help them.
There still remains a major gulf at the heart of the human family. By this I am referring to the North-South divide. Today's economic disparity can no longer be ignored. It is not enough to merely state that all human beings must enjoy equal dignity. This must be translated into action. We have a responsibility to find ways to achieve a more equitable distribution of the world's resources.

We are witnessing a tremendous popular movement for the advancement of human rights and democratic freedom in the world. This movement must become an even more powerful moral force, so that even the most obstructive governments and armies are incapable of suppressing it.

Human rights, environmental protection and great social and economic equality, are all interrelated. I believe that to meet the challenges of our times, human beings will have to develop a greater sense of universal responsibility. Each of us must learn to work not just for one self, one's own family or one's nation, but for the benefit of all humankind. Universal responsibility is the best foundation for world peace.

World Conference on Human Rights Vienna, Austria 15 June, 1993.
Excerpts from the Dalai Lama's Address
Posted by eyeontheparanormal at 7:28:00 AM No comments: