The Thing With Liars

Liars have rules you know.  It sounds rather crazy… but, they have rules and will react and let you know the rules as soon as you do not fall for their tale of woes or excuse or even scenario they are attempting to sell you on.  They also have tactics they employ to manipulate people and they like to use humiliation, threats and defaming as their own behavioral modification tool as well as manipulating your audience into believing you are the liar and they are the victim.  Every single person I have exposed pretends to be a victim and will not once EVER admit any wrong doing or argue what it is I exposed about them.  They’ll do a personal attack against me; those who help me and anyone they theorize will get mad and influence me to shut up.  Anyone that has done what I do knows the tactics like a play book they keep in their pocket at all times.  After all, you expose a liar, fraud or scammer, you are hurting their world and they don’t like it and they almost always fight back.  What they don’t fight back with is proving you wrong.

One of the rules of a liar is that YOU HAVE TO BELIEVE THEM.  How dare you even for a second doubt even one word they say?   When someone says something to you, you should accept it as absolute truth… so they think.  The reality is, much of what people say in the paranormal about anything is doubted, whether or not the person who is hearing the story says they doubt their words or not.  It’s the very nature of anything paranormal or supernatural anyway.  But even so, the field has changed and there are so many in the paranormal that are not truthful.  If they are boastful and rude, there is more of a reason people will just avoid them instead of believing them.  You all know you have heard a story at least once and (probably much more then that) when you did not tell the story teller they were full of beans.  But, liars insist on NEVER being doubted.  They usually get mad when they are.

People that tell the truth are usually the ones who expect not to be believed when it comes to their stories.  When it comes to their backgrounds, you probably are not going to hear how great they are or know even what education they have that pertains to the paranormal until you get to know them. Normal people don’t go around listing a bunch of initials behind their name and associations and they don’t usually name drop some famous person acting like they are some schmoozers of the great famous people.  In fact, name dropping is very common with frauds and not with those who are on the up and up.  Now, you can’t always tell this way either and doubt should be something people do when hearing about any one with an attitude of how great thou art or a list of their greatness listed on their page.

Liars are elaborate and good at what they do, but, they usually make huge mistakes that can easily be found online.  They tend to be braggarts and often you’ll find what they have been saying all over the internet in various online sources.  The reason I point out liars is, because to be a scammer, fraud or thief, you have to be a liar.  That goes for sex offenders too or anyone looking to use the paranormal as an avenue to do any type of dishonest action or crime.

Liars have a tendency to generally have very impersonal pages and their pages read like a ad campaign for all their projects.  They rarely interact and often talk of their “fans” when in reality; they probably don’t really have any and have been sending out invites themselves to like their “fan” page.  Most people like the page out of courtesy.   They tend to pay attention more to numbers instead of interaction and the truer reality.  Liars often have several fake profiles that can “like” or support what it is they are doing as if some gang of ready made great fans.  They also will oppose and stalk with these names.

Fake pages are usually less then 3 months old and have less then 300 friends.  They are usually odd names or misspelled common ones or most often, names of people they do not like misspelled.  They’ll either have their photos blocked, or not have many.  No personal information about family or interaction of friends is usually seen.  (On a rare occasion some will fake to this degree, but, it’s very rare.)  You want to look at their likes and check that out.  It will often show a truth to them that you can see through a pattern of behavior that I will not go into here that will reveal more about them. Generally you have some hater that blasted you somewhere and you have this new person trying to friend you that has a page like the above, especially when you have 0 friends in common, suspect a fake account for not so good reasons.

I do get accused of having many fake accounts myself.  The reality is, unless I’m trying to get a point across and they have me blocked, such as with Ryan Buell and his continuation of selling tickets to events that were either already canceled or were previously to the same tour in other cities and I needed to alert the fans to NOT spend their money… unless it’s some scenario like that, I don’t do that.  I USE MY OWN NAME TO SAY WHAT I HAVE TO SAY.  I do not hide behind aliases ever.  There are several Evan Jensens in the world.  I am but one in hundreds.  I have had other accounts I started when blocked as Facebook gets a little persnickety when I’m making pictures of people and teasing them in an effort to mirror back their obnoxiousness.  I have forgotten the passwords when my main account was freed again.  I have to laugh at the morons who point out MY OWN NAME as another alias though.  I’m just wondering how that works. LMAO  I do what I need to do out there and I absolutely do need more then one account to do it for several reasons.  But, not every hater they have is me, which seems to be a trend with these fakes.

Now, besides using their many aliases to attack, they usually try to humiliate or defame and making up their “facts” or seeming to have complete hallucinations is perfectly ok.  After all, if you upset a liar, they react and they have no problem unleashing the pits of hell in the way of their (what they think is clever) repertoire of slams, bashes and humiliations and will direct it in a way, guaranteed with a cherry on top with a threat.  Yep, it’s humiliate, defame and threaten every single time.  This to me is very tell tale when someone comes at me like this when asked a question or mentioned in a sentence.  It’s my biggest hugest red flag that says… “LIAR, LIAR, PANTS ON FIRE!”

These types of people do have a tendency to stick up for each other in an effort to protect themselves. When they come together… they always do…  After all, the enemy of my enemy is my friend. However with the current group, it does appear much more then that and I believe that these people not only know each other, but, appear to work together and even have similar tactics for pan handling, theft and behaviors to intimidate and manipulate others.

Since I have been doing this for years now and have learned some of the traits of the fakes and frauds and those who use the paranormal for taking advantage of the innocent public, I have decided to write a book on how to recognize them and deal with them.  It has now become evident that the people in the paranormal as well as home owners wanting to keep their family safe need some information on how to recognize these types of people.  Our world has changed folks and you can no longer just allow people to come into your home who are promising to help you, no matter how sincere they are.

My advice for people out there, if they seem over the top and braggarts to a large degree, whereby they post all these selfies as if self glorifying themselves, stay away from them.  If you have something telling you they are not who they say they are, stay away from them.  Ask for references… check the local sex offender list always on these people.  If they can’t give you full names, avoid them.  Don’t join any group that you can not have personal information such as full names and addresses of those in the group.

Most of all people… learn to trust your instincts!

Examples of exposed frauds and scammers reacting. [Click to enlarge]. 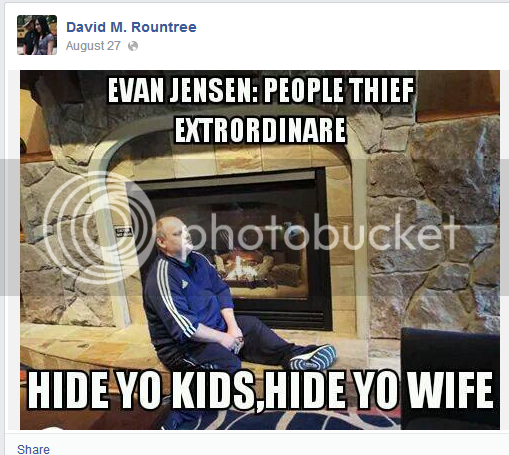 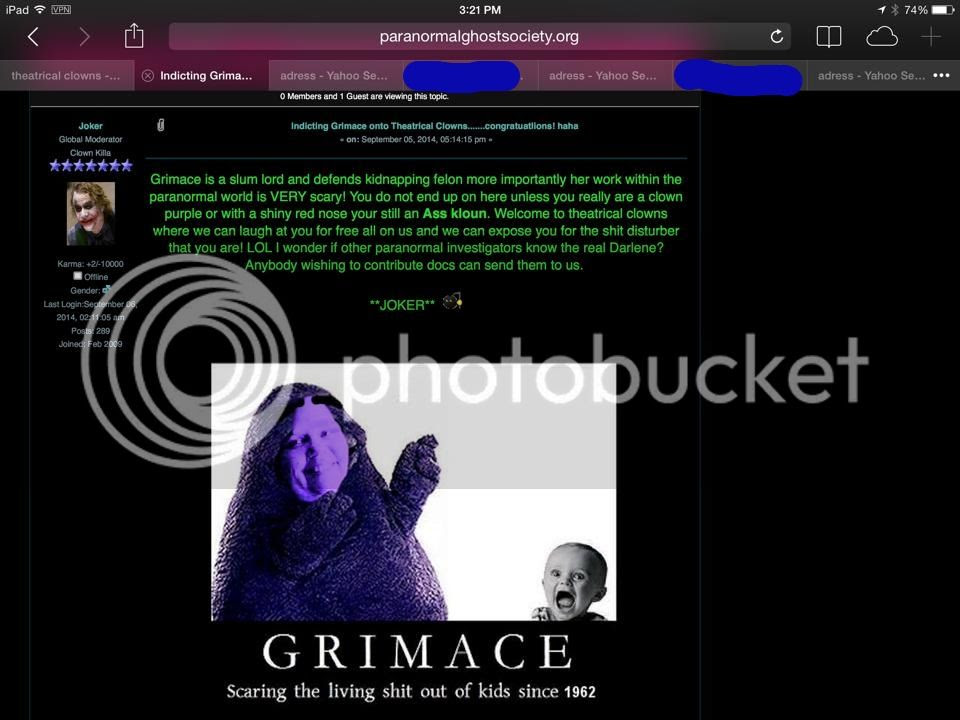 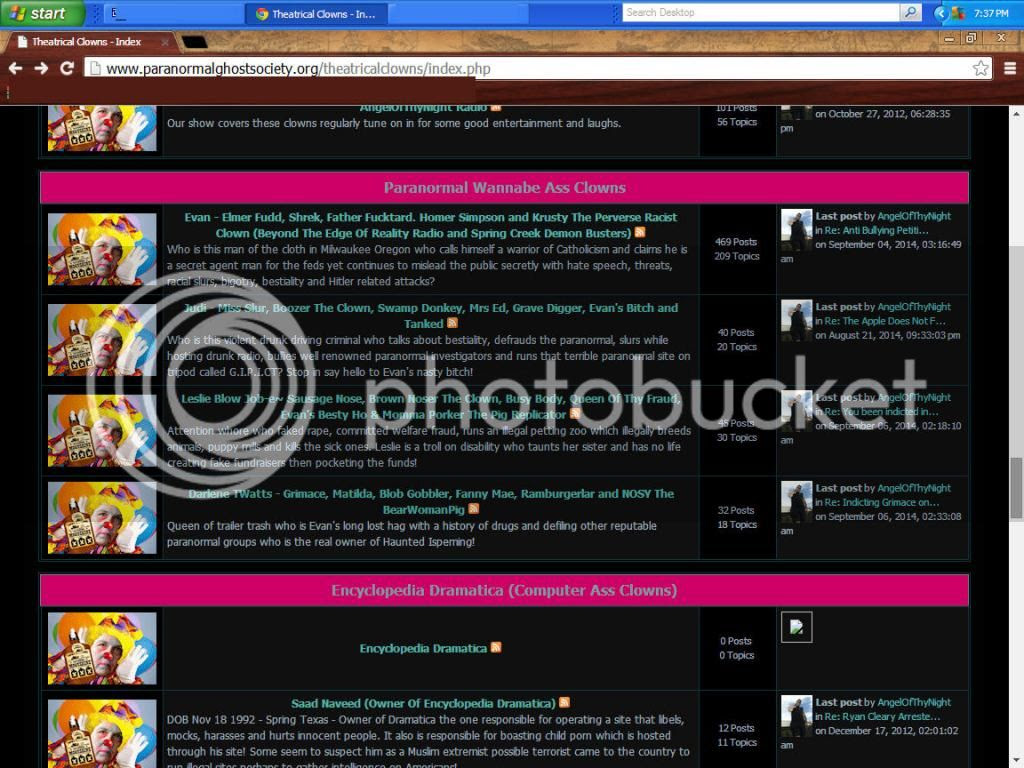 By Evan Jensen, Producer of Beyond the Edge of Reality Radio Network