How to Achieve Happiness & the Unsung Heroes of Compassion 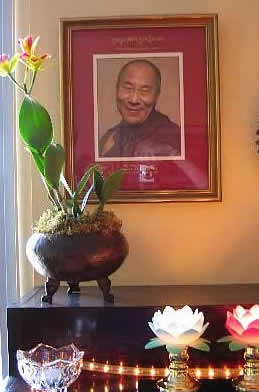 San Francisco, CA, USA, 23 February 2014 - This morning, His Holiness the Dalai Lama drove from San Francisco out to Richmond, where the Tibetan community that has grown from a handful in the 1980s to about 1500 today had invited him to inaugurate their new Community Center. Tibetans of all ages lined the street as he arrived to a traditional welcome.

Kunjo Tashi the community President escorted His Holiness into the building. He cut the ribbon across the doorway into the temple and scattered rice as he recited auspicious prayers. He inspected the labels on the volumes of the Kangyur before taking his seat on the throne. Tea and sweet rice were served and His Holiness spoke briefly about the need to preserve Tibetan identity and culture. He stressed that the Center should be useful.

Outside in the chill sunshine, the Tibetan community assembled to listen to the Mayor of Richmond, Gayle McLaughlin, formally welcome His Holiness to the city, following which he spoke too.

“It’s now nearly 55 years that we’ve been in exile. I was a young man then. Those born after 1959 are now parents, so we are into the third generation in exile. In the life of an individual a generation seems quite a long time, but in the context of the greater Tibetan cause 50 years or so is not very long. Tibetans in Tibet have placed their hopes in us.”

He sought to encourage his listeners about the value of their heritage: “We all want happiness, not suffering, and as a consequence we have to see if the mind can be transformed. Tibetan Buddhist culture is not just about prayers, reciting mantras and performing rituals, it involves explanations of the nature of reality. We Tibetans have the most comprehensive presentation of what the Buddha taught. We should not feel deprived, but proud of the knowledge we possess. What’s more we don’t need to rely on any other language to access this knowledge because it already exists in Tibetan. Don’t waste your time getting drunk or gambling. There’s no reason to feel low or demoralized; much better to be confident and optimistic.”

He said these days the Sikyong has taken on political responsibility and the Tibetan spirit is robust. Tibet has the support of many people around the world. The Middle Way Approach which does not seek separation from China has the support of Chinese people in China and abroad. To seek total independence undermines that support and any chance of opening a dialogue with the authorities.

“If we are granted the rights we deserve and which are guaranteed by the Chinese constitution it will do us good. So, the Middle Way Approach is beneficial. Meanwhile, reports I receive from Tibet about monasteries that have turned away from Dolgyal practice and are developing harmony and friendship with other monasteries in their region are encouraging. Be happy”

An estimated 3300 people gathered in the nearby Berkeley Community Theatre to listen to His Holiness. At the very beginning Tibetan children sang the Tibetan and American anthems. Congresswoman Barbara Lee (D) movingly and eloquently welcomed His Holiness to the 13th congressional district, which she declared is the most progressive district in the country. She praised him for his tireless work for peace and thanked him for coming to Berkeley. In response, he began:

“Respected Congresswoman, brothers and sisters, we really need this sense of brotherhood and sisterhood. It is our self-centredness that is the cause of many of the world’s problems. We too are social animals like those ants and bees that have a sense of community and work together by nature without the guidance of religion or law. The environmental crisis makes us part of one world, as does the global economy. Our population is growing; natural disasters are increasing making ever clearer our need to acknowledge the oneness of humanity.”

His Holiness paused and asked his audience: “What do you feel, what is the best way to achieve happiness, is it through money and power? My eldest brother, Taktser Rinpoche, told me that while he was still in his monastery, he never gave a thought to money, but once he was out in the world he realized how important it is. But money only brings us physical comfort. Material values alone do not bring inner peace.

“Once in Barcelona I was introduced to a Catholic monk who wanted to meet me. He had spent five years in retreat deep in the mountains. A wonderful man, I asked him what kind of practice he did and he told me he meditated on love. And as he did so his eyes sparkled. He was very happy and yet he lived on bread and water with very little cooked food. Clearly genuine happiness doesn’t depend on material comfort.”

His Holiness explained that scientists are finding that more compassionate people are happier. A happy mind is conducive to physical health. He said we need friends, but asked how we find them? Trust, transparency, truthfulness and honesty attract friends and create happy individuals, happy families, happy communities and a happier world.

His Holiness also drew attention to the work scientists are doing in the US to help promote secular ethics in secular education. Developing concern for others on the basis of the oneness of humanity is not necessarily a religious teaching. However, all religious traditions acknowledge that there are obstacles to this and teach tolerance and forgiveness. And because we are subject to the drawbacks of greed they also teach contentment and simplicity. Similarly, all the major religious traditions teach self-discipline, so they share common goals. For this reason His Holiness promotes inter-religious harmony. At the same time, scientific research shows that inner values bring real happiness into our lives.

Among the questions from the audience, His Holiness was asked to speak about death. He said that if you lead a meaningful life, helping others and avoiding dong them harm, you can be sure of a good after life. He stressed that peace of mind is essential at the actual time of death, so the dying should not be disturbed. From a Buddhist point of view it is useful to think about compassion and the nature of reality and perhaps do some visualizations, as many do in their daily practice.

The session concluded with a group of young children reciting a short prayer for His Holiness’s long life.

After lunch, back at his hotel in San Francisco, His Holiness was invited to attend a function to acknowledge and commend Unsung Heroes of Compassion, individuals from around the globe who work to alleviate the suffering of others without expectation of reward. This is an organization launched by Dick Grace and the Grace Family Foundation and this is the fourth such event.

After Ngawang Khechog had brought peace to the occasion by playing his flute, the introductory speaker, 90 year old Grandmother Agnes of the Takelma tribe, meanderingly encouraged the audience to stop and think of the great gift of water as an essential part of creation. She called on everyone to join her in praying to the creator to protect and keep His Holiness and his people. When actor Peter Coyote invited His Holiness to speak, he acknowledged her in turn.

“We all come from our mothers and this old lady has showered affection on us like a mother does on her children. We are grateful, thank you.

“In our lives, my generation has seen the major part of the 20th century. I’m nearly 79 now and the killing and violence of that era still goes on in places like Syria. The question is whether such merciless killing is actually part of human nature. Our mothers give birth to us; we are brought up on mothers’ milk. Now scientists say that while anger and fear undermine it, warm-heartedness is actually good for our health. This suggests that in fact human nature is essentially kind.

“The reality is, as I’ve said before, that we are social animals and each of us depends on the community within which we live, so today the idea of war is out of date. In ancient times, destruction of your enemy was your victory. Now it’s as if we are all part of one body, so what happens to others affects us too. We have to take care of each other.

“Usually I say that people younger than 30 belong to the 21st century. My generation belongs to the 20th century, an era that is over. We will not see the great changes to be made in this century. Those who are young today must work to create a better more peaceful world, and I often teasingly say that wherever I am I’ll be watching how you do.”

His Holiness praised Dick Grace for creating an organization that brings such wonderful individuals to wider attention. They each set examples that can only strengthen the younger generation. The Unsung Heroes of Compassion for 2014 each came up to the platform to be honoured and at the end the applause was loud and long.

original link and photos: http://www.dalailama.com/news/post/1083-how-to-achieve-happiness-and-the-unsung-heroes-of-compassion
Posted by eyeontheparanormal at 3:00:00 PM No comments: