This is the basic view of the Four Noble Truths that all schools of Buddhism follow. Rather than just list them, each will be given a solid description.

After Buddha Shakyamuni attained enlightenment beneath the Bodhi Tree, he was ready to teach what he had learned. To five disciples he gave his first teaching, that of the Four Noble Truths. They are referred to as truths since that is the understanding and realization that Buddha taught.

Noble Truth # 1 - The Truth of Suffering:

There are two types of suffering. The internal suffering of all sentient beings, the definition of which encompasses humans, animals and insects, and the external or environmental sufferings. All those living in samsara (the endless cycle of rebirths that we endure until we attain enlightenment) are subject to suffering.

True Suffering is either internal or external.

Internally, there is the suffering of change: as the waves of the ocean change, and as the clouds in the sky are fleeting, so too do feelings of happiness switch to those of despair. When one has dependence upon internal and external causes, the change is swift. If you're hungry and have no money to buy food, you only get hungrier therefore your misery increases. If you buy a new car, you're happy. If that new car gets stolen you're unhappy. All of existence is seen as suffering since unhappiness and happiness are of the same nature. Within the ocean of cyclic existence from human life to animal life and all our lifecycles whatever the realm [samsara] we continuously suffer.

Pervasive suffering: This is the suffering we experience on every level.

There is also the suffering of birth: Due to our delusions and karmic action we've taken birth into the realm of samsara countless times, always enduring great suffering. This will continue endlessly unless we learn to eliminate the root of delusion and karma (action). Those who don't believe in the future do so as they're convinced by delusion that there is no future and no future lives. We can prepare ourselves for future lives by putting effort into eliminating delusion and negative karmic actions.

Sickness is another suffering. The body is fragile, constantly coming into contact with sufferings great and small. Something as simple as a head cold can discourage us. Temperature changes bother us. A person is surrounded by illness, whether he/she is currently sick, or by others who often are in worse shape.

Aging: The nature of the body changes, giving way to decay. Even if young and healthy now, how will you look in 50 years? Aging causes each person various degrees of suffering.

Death: Like taxes, this is inevitable. The mind is separated from the body at death. There is a fear of death which increases the suffering. Through meditation we can overcome death, as we aren't attached to the body. The well-trained mind is a fearless mind. The 4 sufferings of birth, sickness, aging and death are frequently referred to in Buddhist texts.

External suffering encompasses 6 categories. All existence consists of 6 realms which are used to teach people how to meditate on suffering. By meditating on these unhappy realms, a person wishes to leave cyclic existence and achieve the mind of renunciation. The 6 realms are named after the citizens of the realms.

In the desire realm of the gods, there is battle against the demi-gods and there is a huge amount of desire and jealousy which brings with it great mental suffering. Gods with more merit lord it over the gods with lesser merit. Although the gods have the enjoyments of plentiful food, booze and girlfriends/boyfriends, they return to lower realms when their karma is depleted. Upon their death they experience great pain and are ignored by the other gods. Even the gods in the formless realms suffer upon their deaths as they know they have to return to the lower realms.

Demi-gods don't have it quite as good as the gods and are always the losers in the perpetual battles that are fought. Most of their lives in this realm are spent fighting.

Humans suffer from being born, aging, illness, death and having to part with what/whom they are close to. They are constantly undergoing obstacles when they want to achieve a goal like earning more money or trying to establish a relationship with someone who ignores them. Humans often have to encounter horrible situations such as war, famine, and plague.

Animals suffer from ignorance, as they're unable to speak our language. Animals are at the mercy of the weather, hunger and thirst. Sadly, animals are often captured and put into a zoo or displayed in a circus. In the wild, they are hunted by poachers, or as food by other people and animals.

Hungry ghosts live in a realm in which their grotesque forms consist of long, narrow necks, weak limbs and huge, protruding bellies. Their residence is a vast, empty desert where they constantly search for food and drink and find nothing.

Although many people don't believe in hell, Tibetan Buddhism teaches students that there are several levels, including 8 levels of fiery hells and 8 levels of freezing hells. There are also a few neighboring hells that consist of fiery ash, swamps made of waste matter and a molten lava river.

To experience the suffering of samsara is something you must do in order to understand the sufferings of other beings, regardless of their realm.

Noble Truth # 2 - The Origins of Suffering:

This is the suffering of all sentient beings in relation to their environment. In Buddhism, nothing is believed to be true until it's been experienced. The teachings are true as the teachers have experienced them and have recognized this themselves. Imagine that you visit a psychic and are told that in one year you'll win a lottery. Nice thought, highly unlikely, you'd think. But it really happens and then that remark from a psychic becomes true. When Buddha taught the 4 Noble Truths to his students, only after they practiced them did they occur.
Karma:

Every action that we do is karma, from the smallest to the largest.

Karma of the body, speech and mind can also be referred to as physical, mental and verbal action.

Further, there are virtuous, non-virtuous and neutral actions.

Lying, divisive talk, swearing, and gossip are the 4 non-virtuous actions of speech.

Engaging one's mind in objects of attachment; thinking thoughts of harming others, and wrong views such as self-cherishing [in which we value ourselves above all others] are the 3 non-virtuous actions of mind.

To engage in virtuous actions, you reverse every negative into a positive. Instead of stealing, you abandon stealing and thoughts about stealing. Naturally this applies to all of the actions.

Delusion is ignorance. It's the mind grasping at non-reality. Or a dark, dull mind. The 6 root delusions are:

Ignorance - the deluded mind which hides the mind from seizing the nature of the object clearly.

Hatred - the deluded mind that hates oneself and/or others.

Pride - the pride of the deluded mind seeing oneself as better than others.

Deluded doubt - the doubt which develops negative emotions within us.

Deluded view -Due to ignorance and attachment, a person cultivates a view that is false.

There are 4 characteristics of full karma for any action. Intention, preparation, performance and, finality. For example, if a person were to commit a robbery, they would have to hatch the plot, prepare for the robbery, steal from whatever source they've selected, and get home safely with all the money.

These 3 actions, also referred to as white, black and mixed, produce various results. All positive karma is virtuous as all negative karma is non-virtuous. Mixed karma can go either way, depending upon the circumstances.

To propel is to throw and that's what each birth seems like""being thrown into a family and later having to fend for oneself. If the actions one has done in the past are negative, rebirth into hell, hungry ghost and animal realms is the result. For positive past actions, the realms of the gods, demi-gods and humans are where someone is sent.

Noble Truth # 3 - The Cessation of Suffering:

Since our causes for problems can be eliminated, we learn to be free of suffering. This is achieved when we realize that the way we're taught to see things, whether oneself, others, or any type of phenomena, existing from ourselves. Overcoming delusional thinking, we are then free of the 4 sufferings, [birth, sickness, aging and death] as those are generated within a mind that's unclear of the truth.

The 4 characteristics of true cessations are: Cessation, peace, benefit and pleasure, a result of the first two and definite emergence.

There are 4 True Paths which are attained once we overcome the need to be attached and have everything pretend to be permanent. A basic example would be this: How many people have chosen a permanent job over a temporary job and been fired or quit within six months? Where's the permanence in that? On a more sublime level, if we understand impermanence fully then we achieve liberation. The second path is that objects/ideas/feelings, etc. are pleasurable. Actually, they are only misery in disguise.

The third path is to rid ourselves of wrong view and comprehend emptiness. Our Compositional factors [aggregates] aren't different from our selves. Our self doesn't exist independently. We come to the final path when we understand there is no self, there is selflessness.

Read more about the 4 Noble Truths! As always, the Dalai Lama has a great way of explaining dharma! 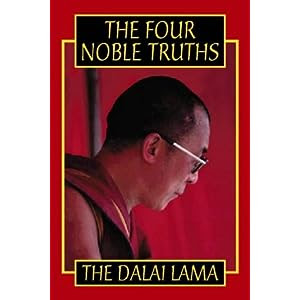 The Four Noble Truths - paperback edition
Posted by eyeontheparanormal at 7:20:00 AM No comments: