By: Anjel Guyde
We all have this fascination of wanting to know the “unknown”.  We want all the puzzles solved, the missing found and criminals held accountable.  When it comes to Jack the Ripper, everyone thinks they know the answer.  On Amazon, there are almost 3,000 books on Jack the Ripper alone.
Crimes that took place in the Whitechapel District in London in 1888 where murders by the famous “Jack the Ripper”.  An organized Serial Killer that brutally butchered women who were mostly prostitutes.  An Organized Serial Killer is one that carefully picks the victims and brings the tools to kill the victims and brings them back with him when they leave the crime scene area.  This was a calculated man that found his victim, lured her into a place where he felt comfortable and then sliced her throat.  With the slicing of the throat you do so for two main reasons, to kill quickly and to stop the victim from screaming.  If he cut the throat from behind, there would be blood spatter in front of the victim and across any wall or building.  If he cut her throat from the front, he would be soaked in blood.  I would have to say that most were cut from behind. 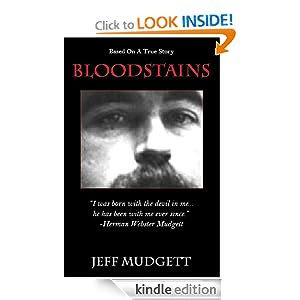 Bloodstains
Now, Mr. Jeffrey Mudgett, who wrote “Bloodstains” and is now attempting to prove that his Great Great Grandfather is the famous “Jack the Ripper”.  He has tried to use letters that Holmes allegedly wrote against some of the “Ripper Letters”.  When you have compare handwriting skills, you have to look at each letter and how it started and stopped.  Are their extra loops or a specific way that someone writes one particular letter.  Now, when you look at the two letters, the handwriting looks familiar, but they are not.  For a handwriting expert to report on this would be very difficult since that style of writing was over 100 years old.  But, once again, there is NO PROOF that “Jack the Ripper” ever wrote one letter!
Mr. Mudgett’s handwriting sample:

Mr. Mudgett believes that Holmes was overseas during the time of the killings in the Whitechapel District in London.  There is NO PROOF that Holmes was ever in Europe.  Back in the last 1800’s the only way to get to London would be by way of a Steamship which would take almost 6-7 days on board before reaching Europe.  H.H. Holmes at that time was married to Myra/Myrta Belknap in Minnesota in 1887 while Holmes was finishing his “Castle” in Englewood, Illinois.  Myra/Myrta and Holmes had a child together, Lucy, who was born in October 1888, which means that she had to have been conceived by January 1888.
Again, let’s look back at the dates of the “Jack the Ripper” killings:
Emma Elizabeth Smith  Died April 3, 1888
Martha Tabram            Died August 7, 1888
Mary Ann Nichols        Died August 31, 1888
Annie Chapman            Died September 8, 1888
Elizabeth Stride             Died September 30, 1888
Catherine Eddowes       Died September 30, 1888
Mary Jane Kelly            Died November 9, 1888
Now getting a room on a steamship is very costly, approximately $150-$350 for a one-way passage, that would mean that Holmes would have traveled at least twice to Europe, making it four complete trips that would have cost him approximately $600-$1,400, during the time his daughter was born.  Holmes would not have stayed away from his “Castle” for almost a year, nor his new wife almost after conceiving his child.  I have not found one thing Mr. Mudgett has stated to prove to me that this is the same man that created such horrendous crimes in another country.
Holmes was convicted of killing 27 people and was hung until dead in the Moyamensing Prison on May 7, 1896.  The Castle itself was burnt down in August 19, 1985 and where the Castle once stood is now a Post Office that will be closing down soon at 63rd & Wallace in Englewood, Illinois.
Mr. Mudgett is trying to get paranormal tours down in the basement of the Post Office, but most of that was not part of the original “Castle” property.
Mr. Mudgett is trying to prove that Holmes is “Jack the Ripper” and is creating his second book called:
“The Sequel… Two Plus Two = 5…  The Trial of H. H. Holmes as JTR!”
Seriously, anyone that believes that his Great Great Grandfather was “Jack the Ripper” has got be delusional.  Show me the proof and not make accusations in attempts to sell more books that you cannot even get in a real book store.  Mr. Mudgett states that he found this through his Great Great Grandfather’s writings, but he never has shown even one page to anyone to check the handwriting.  He will only show a small sampling.  There is only one picture of Herman Webster Mudgett and he states that he even looks like the sketches.  Of course he does, back then most men had the same kind of mustache and wore hats, just like Holmes did in those times.
The point is that finding out who the real “Jack the Ripper” will never be solved because there is NO EVIDENCE to prove who he was.  Show me the proof, real physical proof and maybe I’ll consider it, but there is nothing to be found.  It will always remain a mystery, let it stay that way.


Mr. Mudgett needs to find a new topic to write about, maybe one that he can prove his facts before stating anything that can be proven otherwise.

This article was originally posted on SciFake.com