Why The Dalai Lama Matters: His Act of Truth As the Solution for China, Tibet and the World

His Holiness the Dalai Lama is an extraordinary example of a life dedicated to peace, communication, and unity. What he represents, and what he has accomplished, heals and transcends the current tensions between Tibet and China.

Why the Dalai Lama Matters explores just why he has earned the world’s love and respect, and how restoring Tibet’s autonomy within China is not only possible, but highly reasonable, and absolutely necessary for all humans to have a peaceful future.

In the few decades since the illegal Chinese invasion of Tibet, Tibetans have seen their ecosystem destroyed, their religion, language, and culture repressed, and systematic oppression and violence against anyone who dares acknowledge Tibetan sovereignty. Yet, above it all, the Dalai Lama has been a consistent voice for peace, sharing a ‘Middle-Way’ approach that has gathered accolades from the Nobel Peace Prize to the Congressional Gold Medal. Modeling this peaceful resistance shows the world that nobody is free unless everybody is free—and that a solution exists that can benefit all parties, not just one. And more than just his nation has taken notice. His inter-religious dialogues, honest, humble demeanor, and sense of compassionate justice sets him apart in a world at war with itself.

Robert Thurman, renowned Tibetan scholar, president of Tibet House, and longtime personal friend of the Dalai Lama, presents a bold, reciprocal five-point plan for establishing Tibet’s genuine autonomy within China, letting China renew its image with the world by allowing the Dalai Lama to guarantee freedom for his people. When China changes policy and lets Tibetans be who they are, Tibet can, in turn, join with China in peaceful coexistence.

Why the Dalai Lama Matters is not merely a book about Tibet or the Dalai Lama. It is a revealing, provocative solution for a world in conflict, dealing with the very fundamentals of human rights and freedoms. By showing the work that the Dalai Lama has done on behalf of his people, Thurman illuminates a worldwide call-to-action, showing that power gained by might means nothing in the face of a determined act of truth. 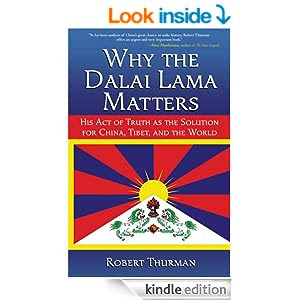 Amazon hardcover book link: Why The Dalai Lama Matters: His Act of Truth As the Solution for China, Tibet and the World

Kindle link: Why the Dalai Lama Matters: His Act of Truth As the Solution for China, Tibet and the World

Visit the website: http://dalailamamatters.com/
Posted by eyeontheparanormal at 3:35:00 PM No comments:

Email ThisBlogThis!Share to TwitterShare to FacebookShare to Pinterest
Labels: chinese invasion of tibet, robert thurman, Tibet, Tibet and the World, why the dalai lama matters, Why The Dalai Lama Matters: His Act of Truth As the Solution for China
Newer Posts Older Posts Home
Subscribe to: Posts (Atom)