In this issue, learn how to spot Facebook Gold Diggers. Meet the paranormal Keystone Cops, stay away from a certain exorcism shopper, and read more Ryan Buell$hit!

Facebook Gold Diggers Try Striking it Rich & Get the Shaft

Lately my Facebook inbox has been filling up with more than my normal amount of requests for help or information about the latest stunt by fake para-celebs. Not sure if it has anything to do with our recent confrontation with a group of paranormal idiots or digging into the shady business dealings of PRS's founder, Ryan Buell, but gold diggers are calling! The good news is that they've gone away empty handed.

Gold Digger #1--Michelle Beacock: https://www.facebook.com/mourine.drew?fref=ts&ref=br_tf the last name really says it all. I laid it on a little thick, pretending that I'd won the lottery and was willing to shower with gifts, a car and a house. She had her doubts about the story or should I say he had doubts, as many of these cons are men pretending to be women. She was better than some but this post was her downfall:

I love restaurant,camping,snuggling by a campfire & making love under the stars,or in the confines of a cosy tent setting. Either way its a very sensual way to spend a great weekend.My other interest include swimming, reading novels,writting poems, cooking, movies, riding, boating & fishing in the Gulf. I like the simple things in life.What's important is being true to who you are & not being afraid to show it. I value Humanitarian works and charity and this is the reason why I have dedicated myself into it.I have a strong faith in God and would want someone with the same belief.Someone that can be a comfort to me & wouldn't be afraid to learn on me for the same the last book i read was rich dad poor dad it was interesting and i really learn alot from it

She claimed to live north of Los Angeles but kept saying to come down here if I visited. According to her profile, she's lived in Indiana and Washington. Like the others, you could ask a personal question or tell her something personal but she wouldn't acknowledge it. She needed $690 sent via Western Union for her dying mother's medication.

Gold Digger #2 Nancy Jackson a/k/a Yahaya Iddrisu. Here was her Facebook page. As of June 3 it was gone.
https://www.facebook.com/nancy.jackson.33671748

Nothing special about her style but it was quite similar to Michelle's So similar that it got me thinking when I received her questions:

Do you any tattoos and body piercings? 20. What is your favorite Positiong in Sex?

If you get a friend request from one of these, write back and say I got one gold digger by the name of Ryan Buell in my pocket already.

This next message comes from Kristina Rake concerning an exorcism shopper. What's that? A person not needing help with the demonic but one with serious psychological issues.

To all my paranormal friends: A WARNING! !

I was contacted around February by a woman named Emily London. She believes she is possessed and explained to me that she expected me to be available for spiritual counseling whenever she deemed it necessary and that her husband could help me perform her exorcisms. There was a clear agenda. She believed herself God's gift to intelligentsia. You can tell her by her high use of language and bizarre phrasing. When I referred her to paraclergy, she belittled them, said their methods were trash, and told me off.

Unbeknownst to me, she then contacted another of our paranormal colleagues, who did attempt to help her, only to be abused for not returning her unreasonable texts and calls fast enough. He, too, sensed she had a plan for the person who stays on long enough.

Please spread the word far and wide. She is contacting EVERYBODY trying to get people to do what she wants. She is unstable, abusive, narcissistic, and, I believe, extremely dangerous. As much as you may wish to help her, I advise against it.

Would you all help me in spreading the word? I am serious when I say I sensed danger all around her. She wants to do something specific to whomever she can strong along long enough. Her inability to remain rational is the only thing preventing her from completing whatever plan she has.

You all know me well enough to know is unusual for me to stop someone from obtaining help. But para-shoppers like her must be avoided.

Emily London. Stay away from this poisonous person and spread this warning.

No change of status for the poor folks waiting to get their money back from PRS's indefinitely postponed events.

A demonology class has been postponed repeatedly past the final deadline May 31 with no mention from Ryan. Yes, he or his flunkies who pretend they are him, found time to post and joke around. However, when it comes to living up to their promises they are found lacking.

Here are the words of yet another victim of Ryan Buell$hit courtesy of the Ripoff Report:

I wish to please remain anonymous and truly do not want to start a fight or be bullied. I know a lot of you on here from meeting you in the past and I know how passionate you are about PRS and I do commend you all for sticking up for what you believe in. I also commend those who have spoken up and who are seeking some form of justice or recognition for their grievances.
I knew Ryan for the better part of a year. I volunteered for a few of his events and even became friends with him and his family. I had to walk away from PRS due to some effects the environment were having on me. I know some may counterattack this, but after my time with PRS, I suffered from demonic oppression and experienced one of the worst nights of my life. I have never been able to speak to anyone about this attack and it still haunts me to this day. I have the same reoccurring nightmare brought on from this that has caused me a great deal of pain. I do not blame Ryan or PRS for it...it has become my burden and I thank God my significant other is understanding of it when I wake up terrified and shaking. Since then I have been re-baptized by my church and live my life "souled out" for the Lord.
All that aside. I truly thought Ryan to be a friend. This was until a trip was planned, then canceled by him last minute. Ryan promised to repay me the funds lost. After some time, Ryan disappeared from my life. I contacted him multiple times in the months following, eventually just asking for him to at least say he wasn’t going to repay me. I would rather someone come clean and say no, I am not paying you back than to completely (for lack of a better word) "Ghost" on me.
I have no anger towards Ryan or PRS, and I simply do not care if I ever get repaid those funds. It just breaks my heart that this has happened to me in this capacity and has happened to many others.
I remain neutral in my opinion of PRS, and I do thank them for the time I spent with them. I learned a lot about myself and grew as a person. My only regret is allowing something dark to enter my life.
Thank you for letting me speak up and I pray that any issue is resolved in a quick and painless manner.

Did Someone Try Buying My Silence [Paranormal Bribe]?

On Monday's Chip Coffey Radio Show--real catchy title how many hours went into thinking that one up? Mr. Coffey claimed that little folks like me are just jealous of big old successful folk like him. If we had a chance we'd all be doing the same things he does. Once again, like the umpteenth time, his psychic abilities must've been turned off and his spirit guides must've been sleeping on the job--because he was dead wrong.

On Sunday, while finishing packing for my move to Canada, I noticed the following in my Twitter inbox. It was a personal message from Marc Tetlow [dated June 1]. It arrived after my appearance on the Darkside radio program where we talked about his clients, folks like Coffey, Perron, Zaffis and Buell. 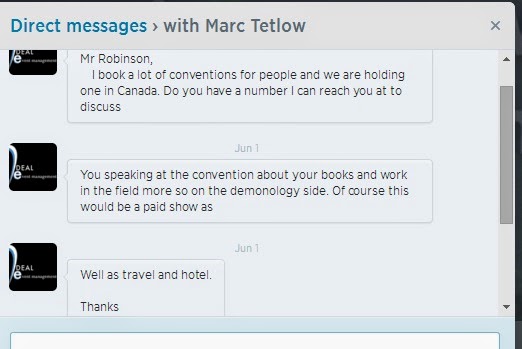 Marc Tetlow is with the following company: http://www.idealeventmanage.com/

Ideal Event Management is based out of Atlanta, GA. They represent such people as: John Zaffis, Jason Hawes, Grant Wilson, and others affiliated with fake para-reality TV shows.

And authors—again, Mr. Zaffis, those Ghost Hunters and a few others.

If you've followed my blogs, books, and radio show you know that I've exposed many of their clients for questionable practices. I wonder why the offer? Is it due to the fact that at least one or two of the above can be found at any conference cashing in the celebrity status on any given weekend?  I sent Marc an email addy as the phone is iffy until I settle down in Canada. Still haven’t received a response.

Somehow, I doubt that their clients would like to see me at a conference. I know of one that carries my photo along with other detractors [we're considered a threat!] and warn security about us to make sure we don't attend. Since all reality shows are faked, outside of PBS's Antiques Roadshow, and that the majority of my books point out such staged garbage, fans of fakery wouldn't attend any event I was at, either.

Not all of us want fame. Some of us want to help people and protect them from getting hurt. My soul isn't for sale for the price of an airline ticket and a cheap motel room.

EARN EXTRA MONEY! If you have a website, forum or blog you can set up an Amazon Associates Affiliate Program link and sell the Kindle version of our books. "Is the Long Island Medium the Real Deal?" [Now in Paperback!], "Never Mock God: An Unauthorized Investigation into Paranormal State's 'I Am Six' Case" [also in paperback!], "Investigating Paranormal State," "Paranormal State Exposed" and "Paranormal Teachings: The Best of Shedding Some Light" and earn money. You can also sell other books and products that Amazon offers. Here's the link: https://affiliate-program.amazon.com/

Posted by eyeontheparanormal at 9:08:00 AM

Lets not forget one of the biggest FRAUDS ever, perpetuating false hope,straight out scamming in your face Long Island Medium Theresa Caputo!

True to form my buddy Ron Tebo and scifake.com are taking it to the street!