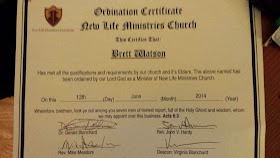 There comes a time when you have to completely rejoice at the mistakes of some of those we expose especially when we turn up the heat.  Sometimes, just a bit of pressure gets them to crack like an old egg that has been fermenting in the back of the fridge for to many months forgotten.  When that happens, it’s a “gotcha” type of moment.

One such moment is when a FAKE PSYCHIC named Christina George who actually admits how she stole the statues and that she still has them while on a radio show called Paranormal Realms and the episode they called, “The last stand”.  She not only does this, but, she actually explains how John Zaffis is involved with the items and how pressure from the owner to the statues and the police, gets him to give the statues back and back away from the heat.  Here’s the thing… in that instance, she admits to the owner WANTING THEM BACK by this admission and certainly knowledge of them wanting them back, (Or why would anyone be inquiring of those statues?) and she admits to the statues being worth money as well and knowing about it.  So she can’t say they are worth a few dollars, as sometimes some other’s suggested.

Now, with this video, there seem to be a bunch of people concerned about the paranormal and really want to clean it up from the bad eggs or paranormal bullies that they exclaim are ruining the field.  It might seem plausible and even admirable if you didn’t know who was involved and just was the truth and what wasn’t.  The problem is, the players in this radio show are being defensive of them selves and have taken a page in our play book to deliver a blow to us, however, not to convincingly, as you will see.  You need a bit of a back story to get the full picture and knowing who is who, is the key.  Let me introduce them…

Let’s look at who they are, shall we?  Now the first person I’d like to introduce is Brett Watson.  He’s been a co-host of mine in the past before I knew what type of person he was.  Jill Burrel, the host to this show, was also a co-host at one time with me for a few shows.  Jill and Brett, as you will hear, are close friends and have been for a good long while according to the show host.  Brett proclaims to be an exorcist.  However, he was recently with an order of exorcist under the Secred Order of Saint Michael the Archangel and Bishop Ron Feyl.  BUT, Brett was not an exorcist, even though he touted that title for quite a while.  He was not sanctioned to do exorcisms by the order and had no authority under the order to do them once so ever, because, they only allow ordained clergy to do them and for good reason.  Brett was merely an exorcist investigator, which merely means, he’s an investigator that looks for the signs of demons and can get the order to come and help take care of the problem.  Brett has furnished his online credentials that are questionable pieces of paper to his ordinations of being clergy and an exorcist.  Anything by New Life Ministries is generally of question.

When Brett started his OWN exorcist order and Bishop Feyl found out, he was excommunicated immediately and with the shock of the Bishop.  Brett has a well known video out there doing his own exorcisms in which he is reading scripted stapled pages together in an attempt to do an exorcism.  It truly shows his inexperience in dealing with such a problem, let alone recognizing what to look for in such a case. I think this is enough to demonstrate just some of his issues and why, he may be on that show, as he is someone I exposed for being a fake exorcist in the past.  I have to wonder why Jill is willing to overlook so much with these people.

The next one is Lord Rick Rowe.  Yes, that’s what he calls himself.  This guy has a forum called Theatrical Clowns where he writes excessively about many in a bullying manner himself and has a forum that took my colleague Darlene over 500 screenshots to record and it’s all on me.  He’s been a busy guy screen-shotting various things to add to his collection of “how bad Evan is” forum where no body seems to be adding to or commenting to.  He is a sick puppy.  If someone comments negatively to him about me, it becomes his “proof” against me and it becomes another post of his forum.  He has actually posted a picture of my home, posted a picture of my wife and insulted her and made several pictures of me insulting anything he can about me. He’s even lied on there quite often and named a sex offender as part of my Oregon team when the sex offender was in Montana. He has no problem just making up lies.  I do not profess to be innocent of never insulting the guy, as it’s hard not to with the excessive obsession this guy has all the time with me.

Now I’m sure you are asking, why would this guy do this?  He actually got mad at me for NOT INVITING HIM ON MY RADIO SHOW.  That’s right; I didn’t invite him on my show.  It’s not that he asked first and I said no even.  I didn’t see how great he was and have him on my show on my own; therefore, I treated him badly and needed to become another victim of his clowning.  Now, the truth is, Lord Rick Rowe has many YouTube videos using the name Angelofthynight where he tokes pot leisurely in front of the camera coming off like a zealot of the dark and frankly, this type of behavior I can not endorse in any way shape or form. His website shows him smoking drugs and strangely his donate buttons for Paypal he has.   He also has stalked others and the proof is right on his pages, which includes a forum on TAPS from “The Ghost Hunters”.  This is classic stalker activity here.

Then there’s the mother that comes on the show… Christina and Leslie’s biological mother, whom like Christina, didn’t spend a lot of time raising her children and had long issues with drug addiction.  Leslie was raised by her grandmother Jewel Jobe, whom was the victim that Christina was highly suspected in abusing and stealing from.  Leslie was then adopted by another family in her young teens.  She was not raised by her mother for the most part.  Christina’s mother does mention about not being perfect and hints to the drug addiction on the show and she also throws in the real reason for her turning on her daughter Leslie which she sees as an awful thing Leslie did which is about the cell phone on their plan that she had that they turned off when she threatened not to have anything to do with Leslie if she came forward on Christina.  Of course, Leslie put her values and morals first, being a victim’s advocate for over 25 years.  We do have court papers and papers from officers to an alleged assault that show that Christina’s mother was at one time against what Christina had done and closer to Leslie during the investigation into allegations of abuse by Christina on her grandmother.

While I did not catch her voice on this show, she is worth mentioning and that is Carol Malone, who was previously reported that a neighbor was her lawyer.  When we called him, he claimed he wasn’t and that she was merely his neighbor and was a bit shocked and even wrote a letter to Blog Talk Radio on my behalf after she wrote on my group page that he sent a “cease and desist” letter to the online radio host.  According to Carol Malone, this same lawyer was supposed to have possession of the statues.  However, Christina does not state any lawyer or Carol Malone has having possession of the statues.  Carol did try to extort $145 from the owner of the statues for an appraisal that could not have been done if she was never in possession of them.

Now that you have some back story take a listen. Remember, they are defending themselves and downing us, rather then truly looking to stop abuse of OTHERS here.  It is tell tale to what they are really about and judge for yourself.

Even page where all the proof is posted on Christina George.

Producer of Beyond the Edge of Reality Radio Network 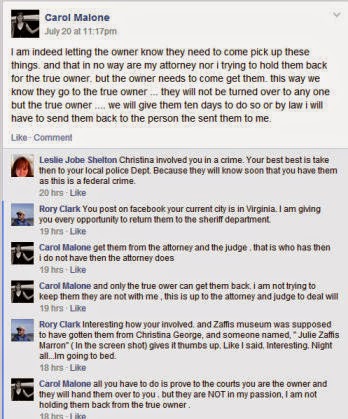 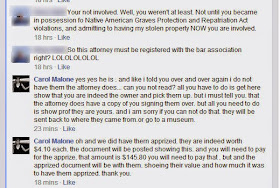 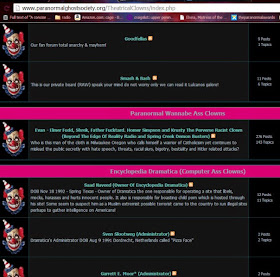 Keep your eye on the Eye on the Paranormal because we have a lot of exposing to do!

Please engage in a discussion of the facts instead of personal attacks. Also, please refrain from swearing as this is a G-rated blog.

Use your own name/company name if making a comment. Any comments that personally attack the author of any post will be deleted. Thank you.